Every successful person has his or her good and worst moments they have gone through. Well for Chris Embarambamba a renowned Kisii gospel artist has his story to tell when it comes to his music journey.

Christopher Musioma well known as Embarambamba is a Kenyan singer, songwriter, a dancer and comedian. He started his music career while at Kirwanda Band under Sagero as dancer and later as Mr Ongengo's dancer. He became independent artist and released many hits songs which he sang in Kisii language. This is where he got his name Embarambamba which he still use up to date. Embarambamba has gone through many challenges in his music journey and at one time he gave up doing music and became a vida vida rider. One day he was involved in an accident where he hit a dog and killed it instantly, he was injured on his forehead and was left with a mark which he says it acts as his Identification. 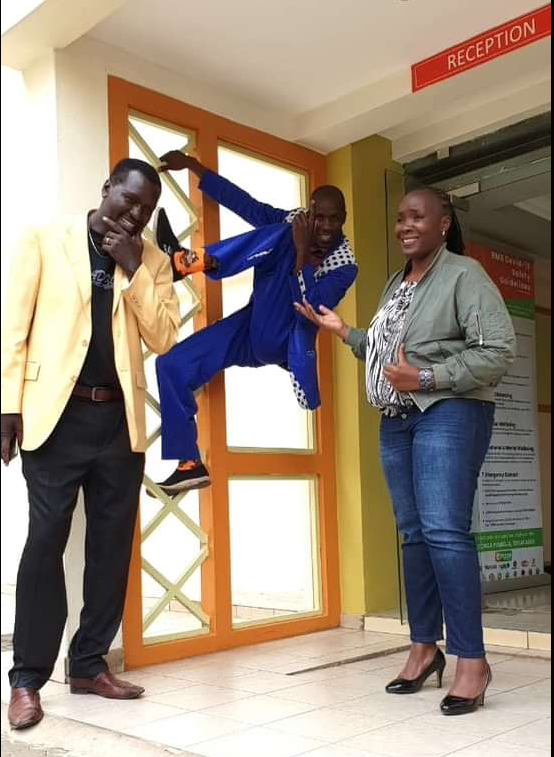 Embarambamba showing his skills after an interview with a local station.

While on an interview with a local tv stations, Embarambamba narated his worst moments as a musician. His first worst moment was a day he was performing live, while he was doing his dramatic moves he fell into a latrine hole which was covered with grass. He was by goodluck rescued by police officers who was at the event. "Kuna siku Nilianguka Kwa Shimo nikiperform live na askari aliniokoa." There is a day I fell into a latrine hole a I was performing live. Thanks to the police Officer who came my rescue. Embarambamba said.

He went ahead and talked his second worst moment which happened in Canivore where he was performing live for Raila Amolo Odinga. He fell into a hole that was caused by his force while jumping up and down. Sadly he was not paid and sustained some injuries. That was the worst moments Embarambamba said he won't forget in his life. Currently he is planning to do collaboration with a Samburu artist, Ringtone, Eric Mondo among others.

How to Make Profit Through Betting