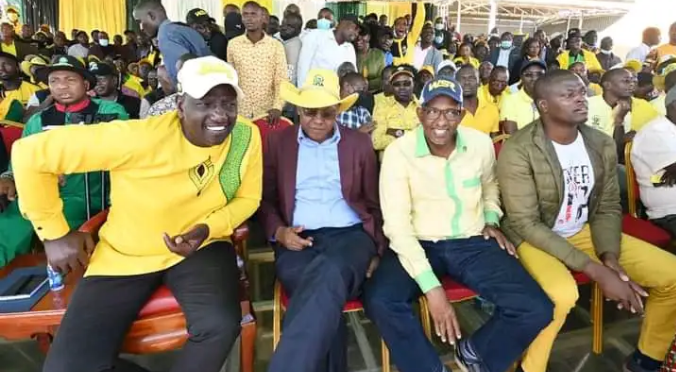 While admitting to the pleasure of bagging Musalia Mudavadi and Moses Wetangula, Duale says there still remains the grand prize who they’ve been struggling to convince and won’t rest until they do.

The Garissa Township member of parliament was speaking while appearing on ntv’s Kigoda Chako which is hosted every week by the station’s presenter, Salim Swaleh.

According to Duale, the main reason they had been able to successfully convince the two, was the arrogance and bravado that their opponents (the pro-Handshake team) had employed in their bid to try and convince them to instead join Azimio. He said that they, on their part, used polite and respectful language.

He nevertheless admitted that for a long time they’ve been trying to woo Wiper leader Kalonzo Musyoka. Far from giving up in their quest to get him, Duale affirmed that they were now more than ever, determined to get him and won’t rest until they do.

Speaking during ANC’s National Delegates Congress (NDC) at the Bomas of Kenya, DP Ruto said the parties had agreed to formally associate in the interest of the nation.

“The only two candidates that have identified the economy as the place where they will begin to address the challenges facing our nation is ANC and UDA.

I believe the coming together of uchumi bora pesa mfukoni and the bottom-up economic model will have the chance to deal decisively with the challenges that face our nation. The hustlers need uchumi bora, and uchumi bora must start at the bottom, and then kazi becomes kazi,” said Ruto.

Oscar Sudi Goes Rogue as He Responds To Mukhisa Kituyi