By PeterF. (self media writer) | 1 month ago 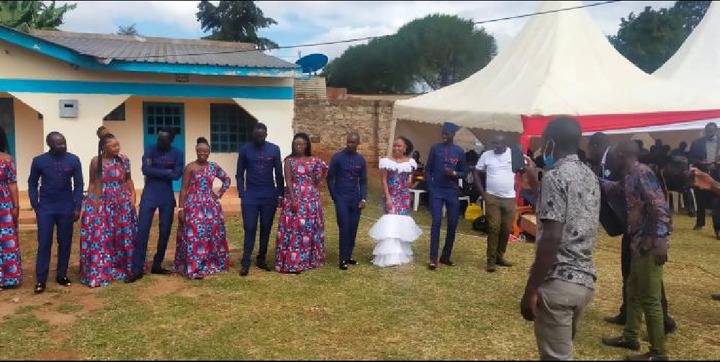 In pictures seen by Kenyans.co.ke, the couple was having a good time at the wedding and the bridal party.

Kiprop donned a navy blue suit and a traditional cap while his bride wore an Ankara fish dress with a white trail.

The couple danced at the bridal party as guests looked on. The lowkey event was held at the bride's home.

Kiprop and his bride only invited close friends and family members and the pictures from the ceremony were shared by his former colleagues at NTV.

Kiprop left NTV minutes after giving his final remarks on an episode of Your World show.

After discussing matters regarding the state of Kenyan football, Kiprop proceeded to make the announcement on his departure.

"This also happens to be my last show here on NTV, yes, you heard me right and I must say it feels like yesterday when I went on air and I have been here for the last 3 years, co-hosting Your world for the last 10 months. This has been a dream come true for me," he stated.

His colleagues joined him in the studio to bid him farewell, bringing a cake to celebrate his tenure.

"It's been a good journey and you have been a great host and we wish you all the best. We will miss you so much for all the hard work you put. When you broke the news to me that you're leaving, I couldn't hold my tears," a colleague stated.

Kiprop credited his confidence in front of the camera to Gachanja and the team for believing in him.

Highlighting his time at the station, one of his superiors acknowledged that at first, they were sceptical in granting Kiprop a chance to co-host the show alongside Gachanja.