He Is Not Great Enough, Musician Juliani Causes A Stir After Remarks About Trio Mio On Twitter

By Rosard (self media writer) | 4 months ago

Musician Juliani has today attacked peoples favorite gengetone musician Trio Mio. On his twitter page he mentioned that Trio mio is not good enough. I will caption directly how he said "Trio Mio Is Good but not great" This caption has sparked so much reactions as Trio Mio angry fans were all over the comment section. 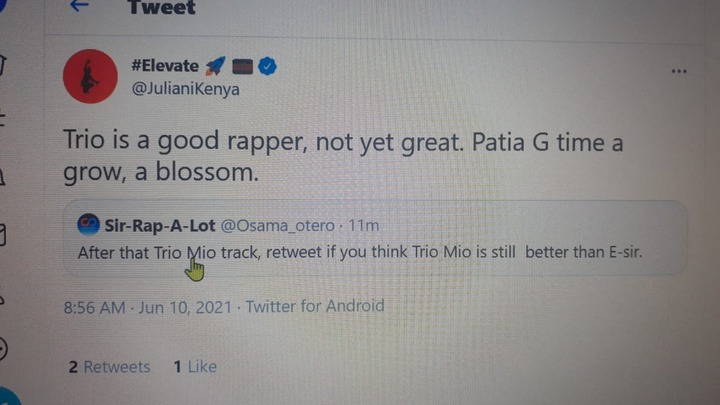 Most of the fans were angry with the fact that Juliani is judging Trio Mio because of his young age. Juliani still insisted saying Trio has not yet matured enough and he is doing trial and error game. As we speak, this is the most trending topic on twitter as everyone wants to be heard and to support their big celebtrity musician.

Spaeking of that, one of the comments was saying that it probably must be that Juliani is feeling jealous tha Trio Mio is getting more thans that he is yet he has been in music for so many years. Others argued that Juliani should go take a shower to make his skin smooth just like that of Trio and he should stop being too nosy.

Juliani is so used dissing other young celebrities as he thinks he has the power to control what really happens in social media. This time he messed with the wrong group as Trio Mio gang is so furious. If possible they could had looked for him face to face and give a thorough beating. It is important that people put him in life for him to realise he is not in control everywhere he wants.

My opinion on this post is that Julia should not had said such words about Trio Mio. It is so wrong to say so to anyone and he should probably apologize. No one should judge their fellow colleagues just like that as people love who they wany

Content created and supplied by: Rosard (via Opera News )

2021 Serial Killers And Crimes That Shock The Whole Country