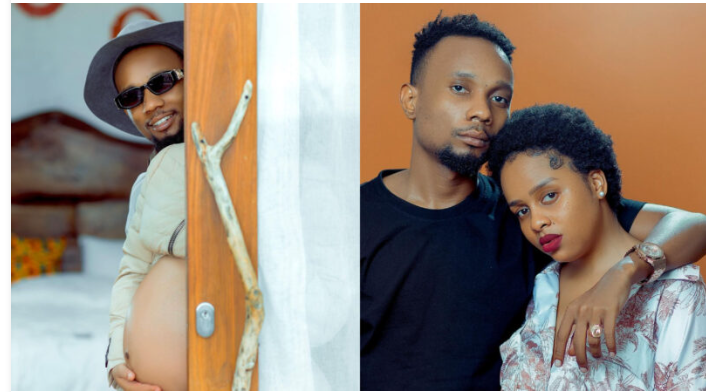 Chagga Heritage rapper Bill Nass of Tanzanian descent has hinted that he and fiancèe Nandy are expecting their first child together prior to their upcoming wedding.

On Wednesday, Billnass posted a picture of her growing belly that was carefully taken to obscure Nandy’s face.

The couple is announcing their impending addition to the family for the first time in public.

“Jeshi ya Nenga (Billnass),” Bill Nass captioned on his instagram page that has a mammoth following of over 3.9 million fans attracting positive and encouraging feedback from his fan base.

Nandy was recently accused of concealing her pregnancy, and it has since been shown that the rumors were accurate.

After walking out in an ensemble that left some of her followers pondering over, Nandy fueled the pregnancy rumors.

The vocalist was compelled to reply after receiving congratulations from several gossip websites.

Nandy sarcastically replied to a question about whether or not she was pregnant in one of the messages in a really polite way without denying or agreeing.

“Umegundua nini kwa hii picha (what have you discovered from this photo)? A fan captioned Nandy’s photo.

Nandy who has previously been compelled to answer pregnancy rumors denied that she was carrying a child for her fiancé Billnass once more in January. She also denied the notion that she was hiding the pregnancy from the public.

The singer made it clear that she wasn’t pregnant at the moment and promised not to keep her fans in the dark if and when she became pregnant.

Nandy acknowledged that she was once pregnant with rapper Billnass’ child in September 2019 but claimed the pregnancy ended in miscarriage.

In anticipation of their impending nuptials, the two lovers have already started teaser videos for their followers.

IEBC, Kenya Kwanza Give Their Remarks on Voter Turnout