What You Should Know About Kiambu County Towns Names And Origin

Kiambu County has many towns and historical places given that Kenya’s founding father Mzee Jomo Kenyatta hailed from this county. 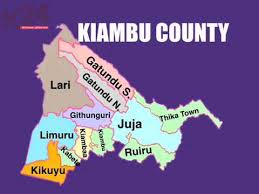 But have you ever thought how the name of your locality came into being? Here are some of the common towns in Kiambu and a brief analogy of how they were named.

1. Ndeiya The word was coined from the relationship between Kikuyus and the Maasai who lived past the escarpment. The Maasai would drive their cattle to the market where Kikuyu would buy them through a common route which was known as “Ndeiya Ng'ombe” and that's how the name came into being.

2. Kinoo There was a large signpost that read “NO THROUGH WAY”. Residents living in this place would refer to the area as “haria hee Ki-no.” In English, this means “the place with a big no”, thus the name Kinoo.

3. Banana A lot of bananas were bought and sold along that area. This made the locals name the market banana.

4. Ruaka"Rui rua aka" in Kikuyu language. This translates to "River of women" in English.

5. Kirigiti A popular cricket field was located at this place. Locals found it hard to pronounce the word "Cricket" hence pronounced the name as “Kirigiti.”

6. Limuru The name is derived from a Maasai word “ilmur” which means donkey droppings. The place had many donkeys thus, it was named Limuru.

7. Thogoto The Church of Scotland Mission was the first mission to settle in the now little town near Kikuyu in Kiambu County. The local Kikuyu Community found it hard to pronounce the name Scotland. They would pronounce it as “Thogoto”.

8. Gikambura The name came from the English term “acre borough. ” The native Kikuyu Community found it hard to pronounce and hence the name Gikambura came into being.

9. Ndenderu Translates from “deed road” which Kikuyus pronounced as Ndederu. 10. Sigona It was derived from “singers with honour.” The people living in that place found it hard to pronounce and would simply say “Sigona.”

Which other name do you know???

"My Family Abandoned Me After I Got Into Accident It's Have Being Eighteen Years Now:Woman Narrates.