For the better part of Friday 39th April, famous Churchill Show comedian Professor Hamo was put on the spot after it emerged that he does not support his baby mama, and a fellow female comedian Stella Bunei Koitie alias Jemutai. 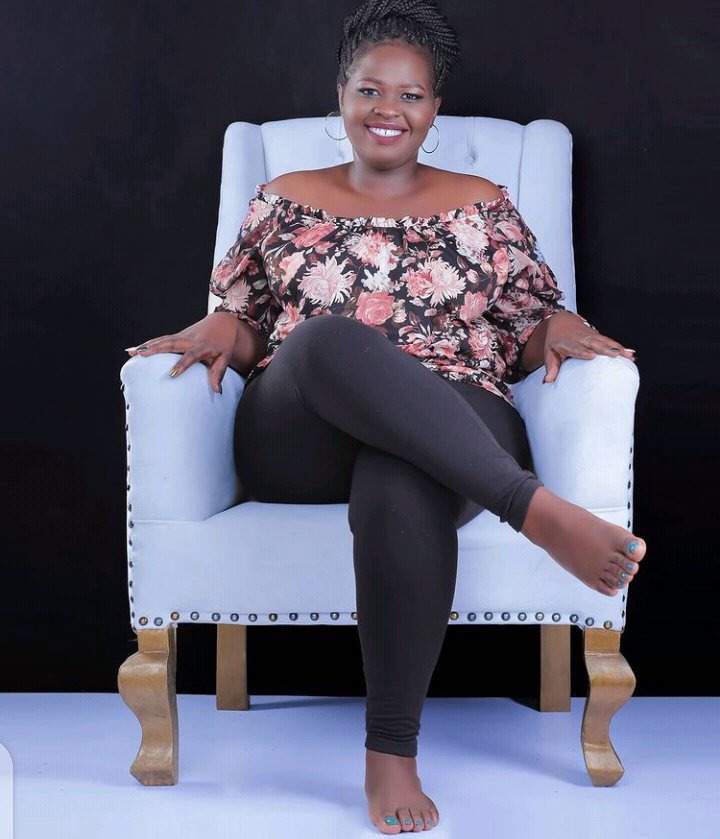 The news about the two screen celebrities sent waves through Kenya's social media, with many of his fans showing their anger towards him because he was accused of not providing any money or upkeep for his children, even when he was in the high end of his career earning millions of shillings.

It should be known that Professor Hamo is a radio presenter working at Royal Media's Hot96 Radio, where he hosts a morning breakfast show alongside Jeff Koinange.

The accusations have sent his approval rating to lower levels and has also lowered his reputation. 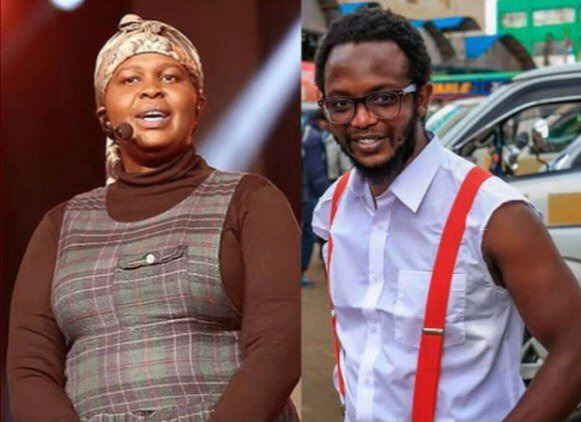 Some Kenyans have said that; say what you must but the mother to your children should not suffer when you're swimming in cash, even if you're married to another woman.

However, Hamo's only response up to now is a picture he posted on Instagram, where he was seen in a cow shed playing with a cow.

After Edgar Obare posted a series of screen shots accusing him of neglecting his own children, comedian professor Hamo has been trending for the better part of the day.

According to Jemutai's audio conversation with blogger Edgar Obare, she has two children with Professor Hamo; a boy named Jeremy and a baby girl. 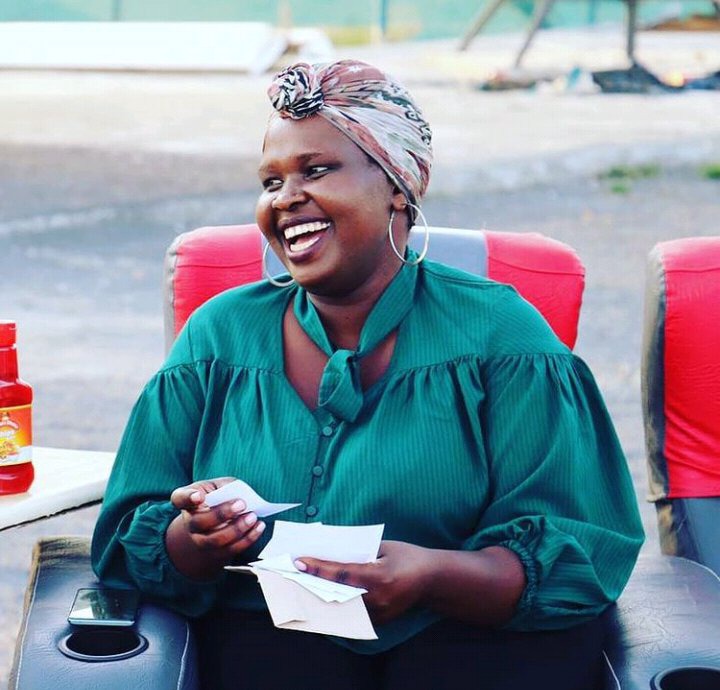 Professor Hamo, on the other hand, is married to another woman who lives in Nakuru with her children, and the two women - Jemutai and the Professor Hamo's wife have been friends for a while now.

Comedian Jemutai is said to have also been helping the second wife to Professor Hamo whenever she can. 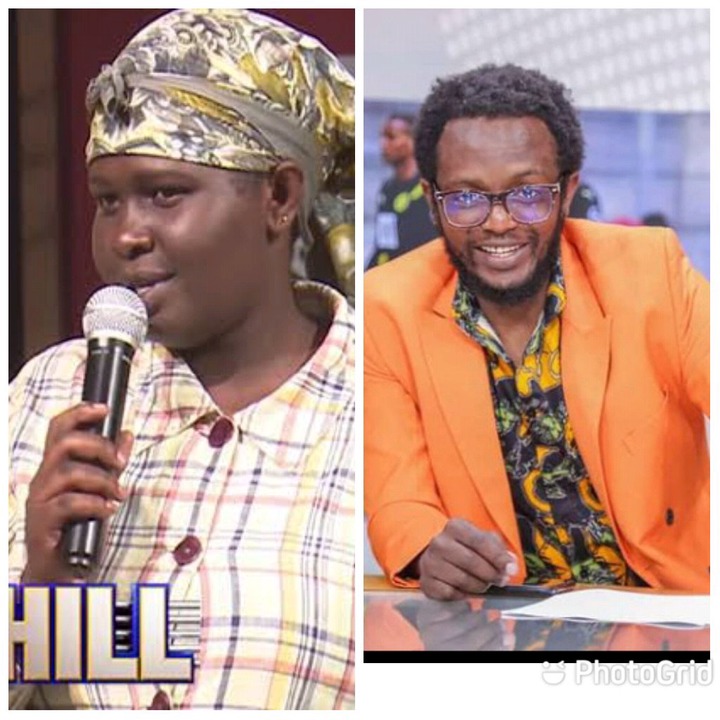 According to a recent post on his Instagram page, Professor Hamo seemed not concerned about the the accusations.

He took a photo of himself tending to a cow and captioned it, "No comment."

This is so obvious that he will not comment on the hot topic because everyone says it is heartbreaking, and he has been attacked by Kenyans who demanded that he must take the responsibility of taking care of his children. 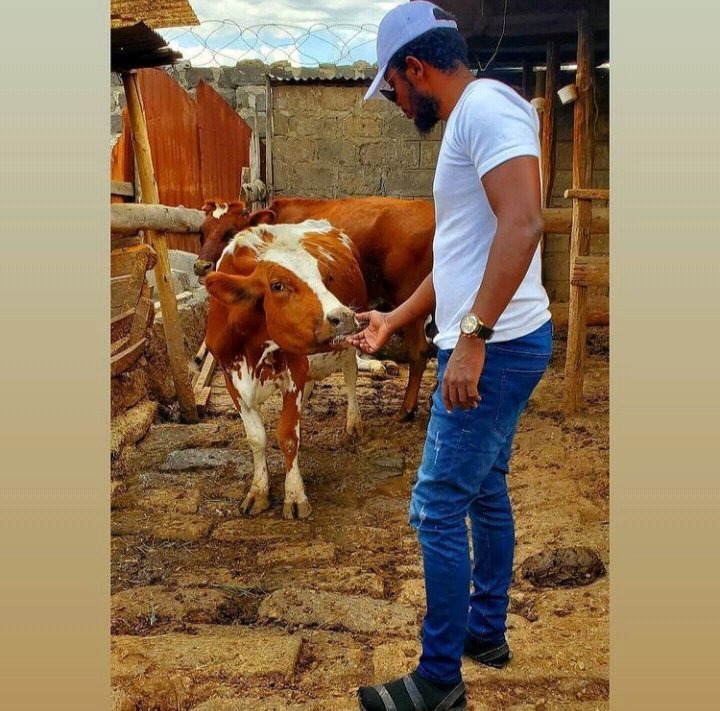 Take a look at some of the feedback from Kenyans after Professor Hamo posted this picture on his Instagram page: 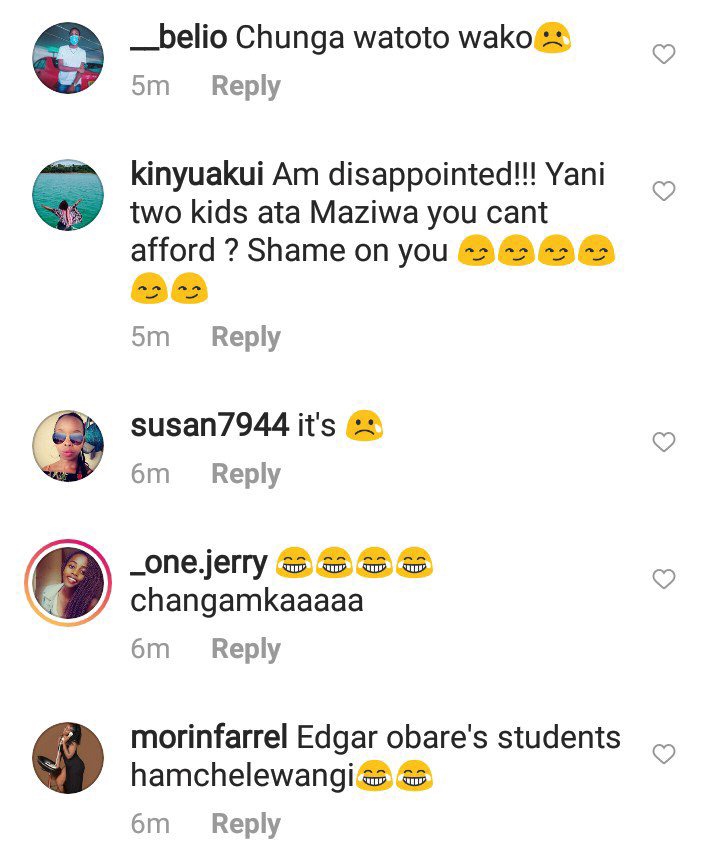 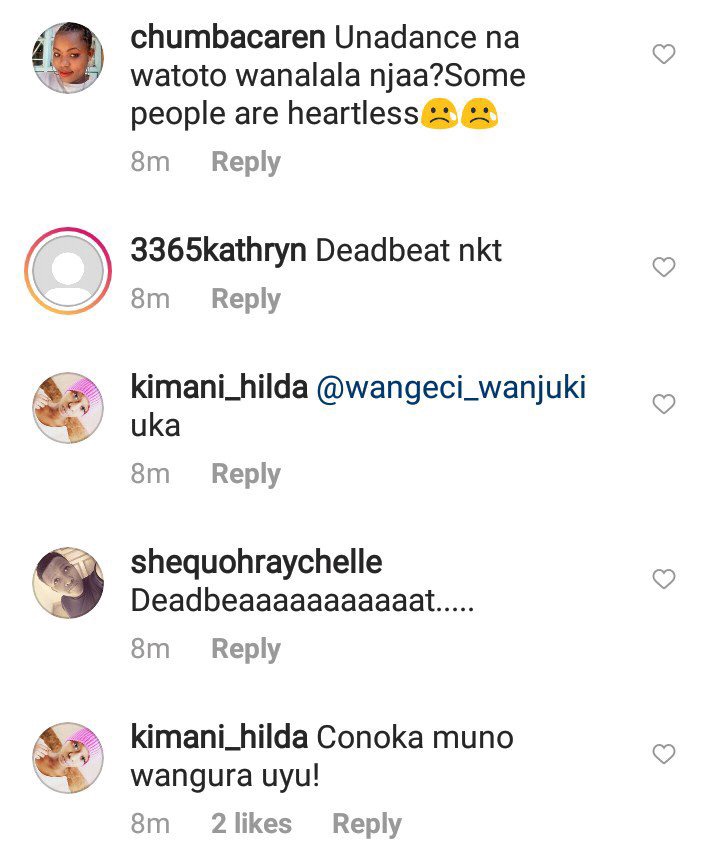 On the other hand, Sarah Kabu who is the CEO to Bonfire Adventures has advised comedian Jemutai to think of monetizing her Facebook account using corporates and SMEs other than selling it as she shared with Blogger Edgar Obare.

Jemutai who has confessed that she is financially drained, placed her Facebook account with over 800k followers on sale for over KES 1.6 million, which means Ksh. per follower. 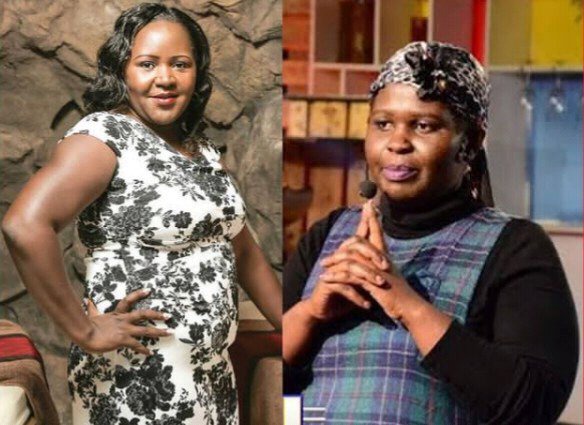 The former comedian at Churchill show who has had kids with Hot96 presenter and fellow comedian Professor Hamo has also revealed that the media personality abandoned her with the kids tossing her into a financial burden.

"Jemutai i beg u don't sell that account with almost a million followers...i can bid for it but noo.. It's your lifeline, you built for years... It's your fans. You need it for the kids and forget that man so that you can focus and think straight." Part of the Sarah Kabu's message read 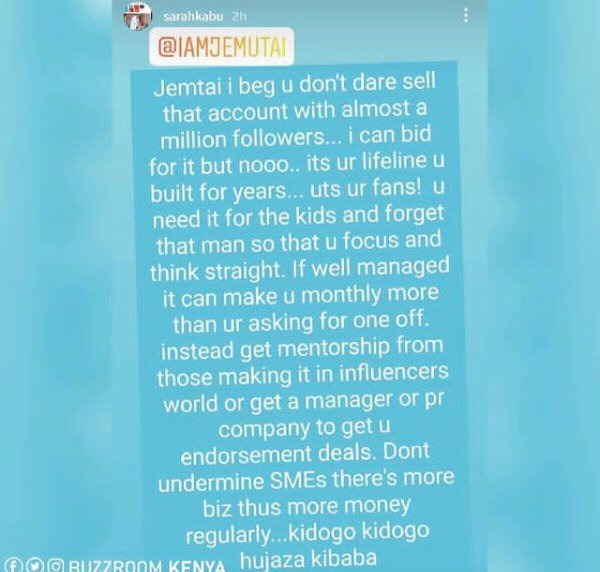 Professors Hamo is yet to make his official communication concerning the allegations by her fellow comedian and fiancé Jemutai.

This channel is closely covering the story of the two comedians and l bring you every bit of the story as it occurs. Make sure to follow me for this and more.

Check out the allegations by comedian Jemutai from the screenshots below; 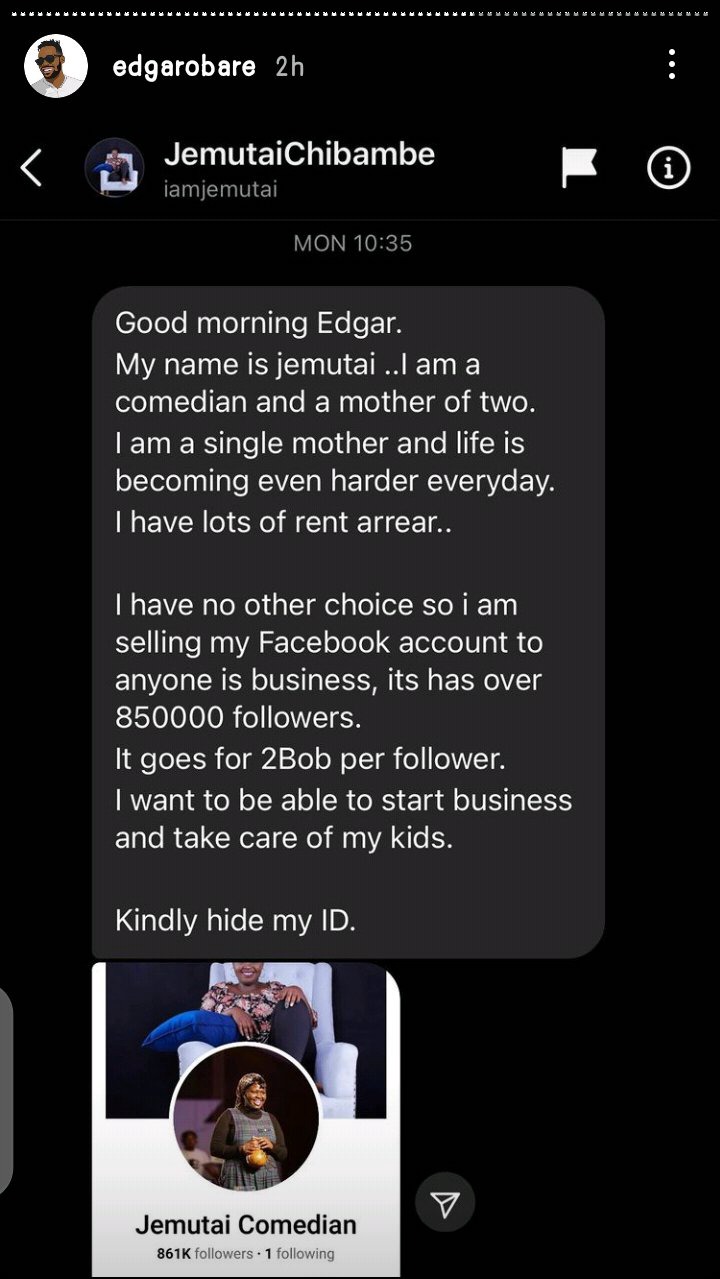 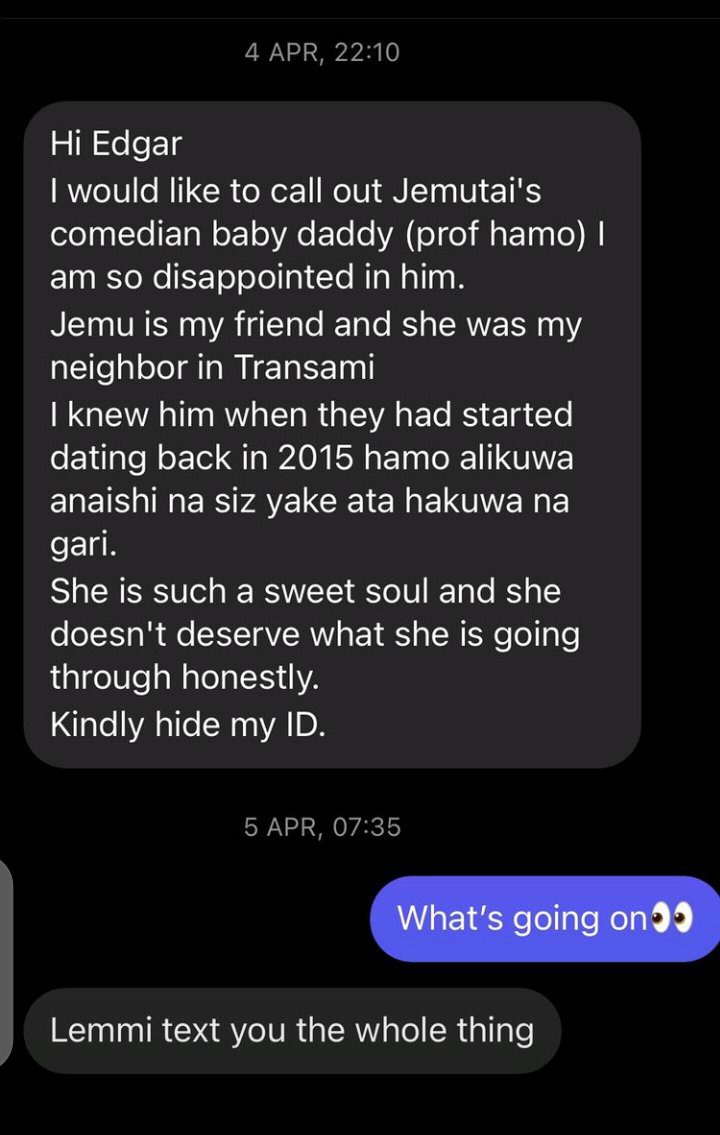 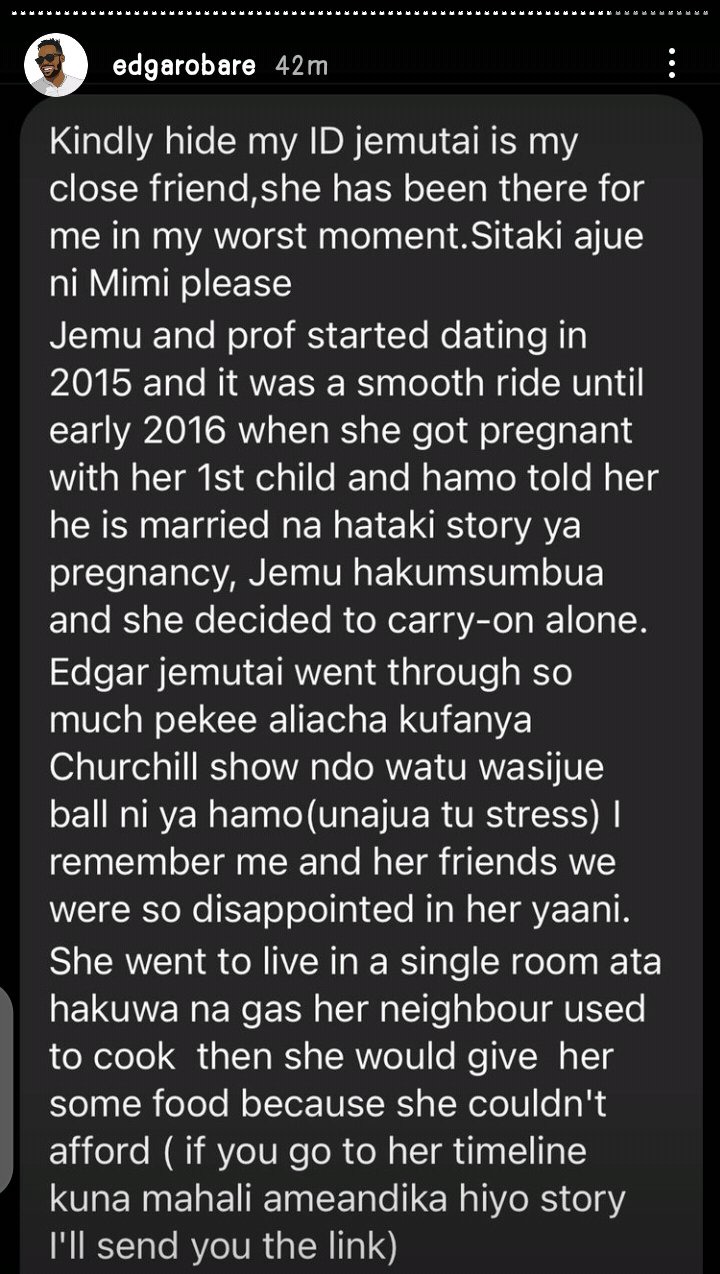 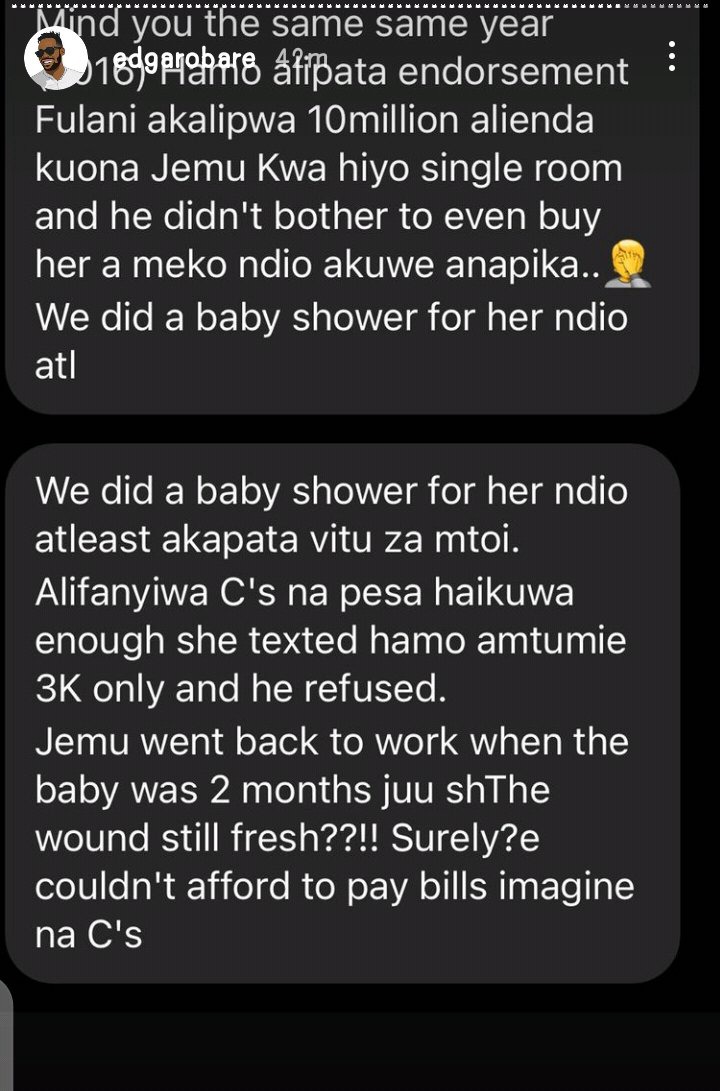 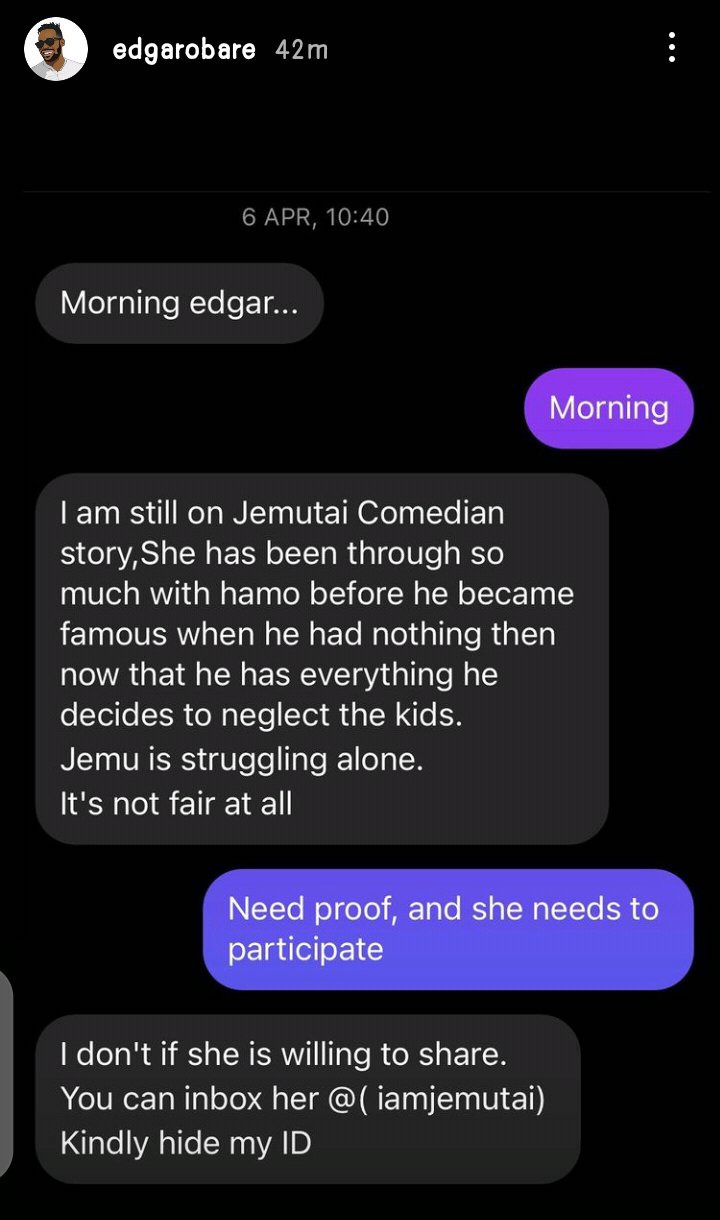 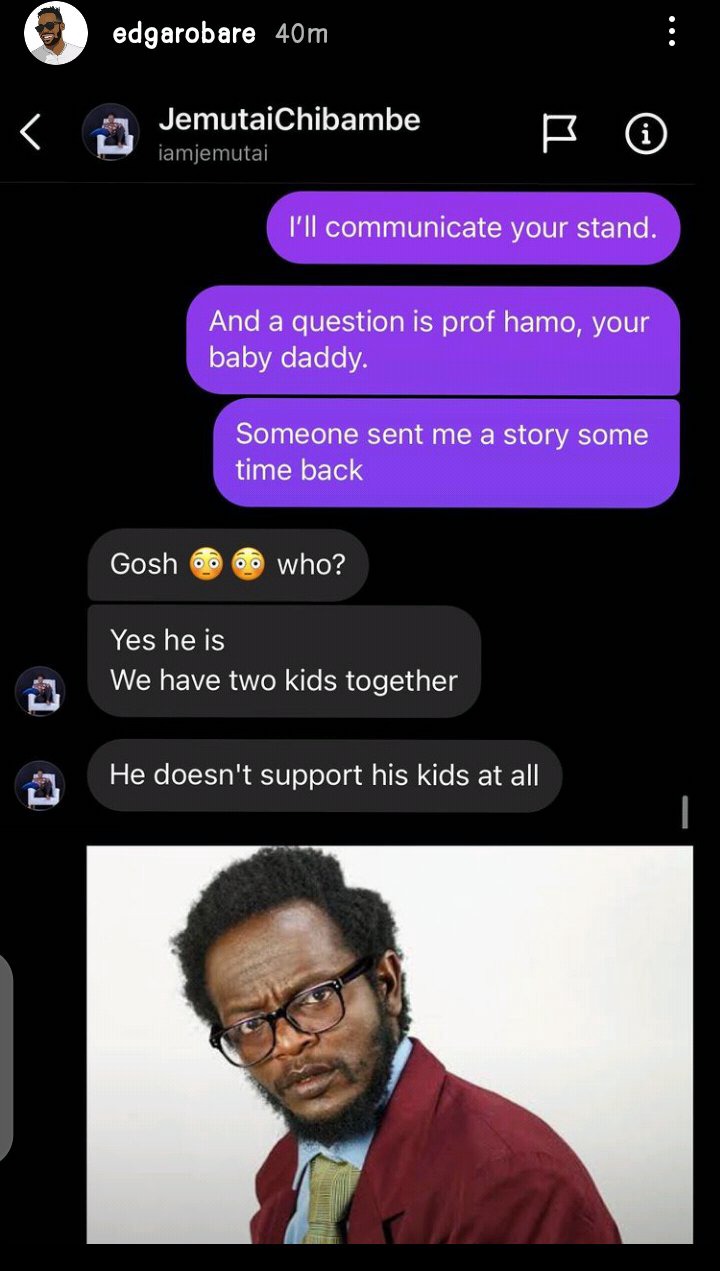