Top 10 Most Subscribed Musicians On YouTube In East Africa 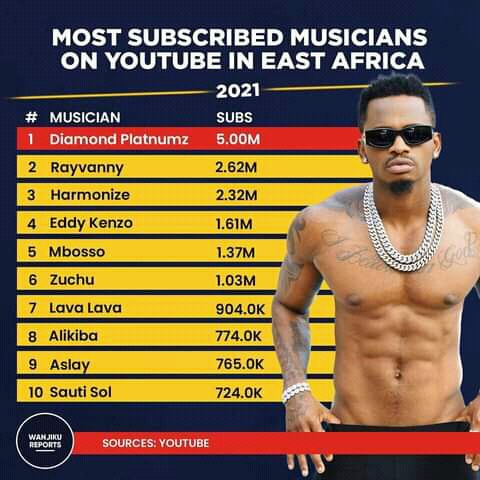 Below is the list of top ten East African Artists with many subscribers in yutube chanel. This is a clear indication that music pays and if you have a talent in singing don't sleep with it, go and explore it as it can take you somewhere.

Diamond Platinumz is one the well known artist in East Africa region and more than 50 countries world wide. Diamond real name Naseeb Abdul Juma Issack born 2 October 1989 in Kigoma Tanzania has been successful in the music industry since 2006 up to date. He leads in East Africa with 10 million subscribers in yutube chanel. Diamond Platinumz also serves as the CEO of Wasafi Records and Wasafi media.

He is one of the Wasafi artist who has won many awards because of his hard work in music industry. Some of his hit songs like I love you, Kwetu, Kiki has given him a huge number subscribers in yutube chanel making him the second artist in East Africa after Diamond Platinumz.

Harmonize also known as Konde boy is the third artist in East Africa in the record of artists with many subscribers in yutube with 2.32 million people.

His official name is Edrisah Musuuza from Uganda, a singer and music Executive and a member of Big Talent entertainment. He is known for his song Sitya Loss which he released back in 2014. He is number four in the list of East Africa Artists with many subscribers in yutube chanel with 1.61 million people.

Mbosso is the former member of Yamoto Band and the current member at Wasafi record lebel. His closes the top five East Africa Artists with many subscribers in yutube chanel with 1.37 million people.

She is the daughter to renowned Tanzanian Queen if Taarab music Khadija Kopa. Such got signed under Wasafi record lebel back in 2019 and has successfully made it in music industry. Her hit songs has earned her more than 1.03 million subscribers in her yutube chanel.

Lava lava is known for his songs like Gundu, Kilio among others which he has released under Wasafi record lebel. Lava lava has 904 thousand subscribers in his yutube chanel.

The Cinderella hit maker is number 8 in the list of East Africa Artists with many subscribers in yutube chanel with 774 thousand people.

Sauti Sol is one of the Kenyan band that has been successful in the music industry since 2006. With more than 50 videos in yutube, sauti Sol has earned many subscribers in yutube chanel hence closes the best 10 East African artists with many subscribers.

ODM Complains of Harrassment By Jubilee Officials In Bonchari By-election

TSC Ends The Following Crucial Exercise As Most Teachers Locked Out

Political Rivalry Between ODM And Jubilee Intensifies In Bonchari By-elections

Embarambamba Does It Differently On His New Song

The Outcome That Kenyans Should Expect From the By-Elections

"I Am Lucky To Have You As My Husband", Milly Wajesus Praises Kabi Wajesus On Her Instagram Page