'I Left Teaching To Go To USA Only To Become A Watchman,' Teacher Explains On The Agony Faced Abroad

By WillyKim (self meida writer) | 2 months Earlier today in a story done by Lynn Ngugi of Tuko, a former teacher got to share about his experiences abroad. In a nutshell, not everything is as rosy as it seems. The man in the feature is known as Patrick Mutoro and comes from Bungoma county. He was a veteran teacher who started his career back in the day.

So he says he grew up in abject poverty and could not afford most of the necessities. His elder brother left school at standard seven but then with him he was very determined to go all the way. He joined Form one without most of the needs including shoes.

He says he studied till form two then dropped out because of lack of fee. He would later rejoin school via school bursary and finished form four. He finished school and became a teacher. He was employed by TSC but then the pay wasn’t good for him as he thought.

He would later teach in a series of private schools including Testimony School, Sunshine Academy, Talent academy and Brookhurst. He was a teacher of Mathematics and Physics and taught a number of people including Maina Kageni.

At one time an opening for Green card came and he saw an opportunity to go and work in the USA. He applied and successfully got the passport. He says that as he was heading to the USA he thought that he would go to continue with his career as a teacher but No!

He would later learn that the jobs available for him was Security and care giving at homes for the old people. He became a security man in one of the supermarkets despite his big status of a respected Maths /physics teacher back at home.

He claims that he did all this for the sake of his children who he was determined to take to school and this made him endure doing such a job. His biggest warning is that the journey or dreams of making it in America is not as rosy as many think.

He would later become a teacher in America yet again but after four years of doing security job.He says greencard just takes you to America,after which you are left on your own.

Follow the link below to watch the whole conversation. 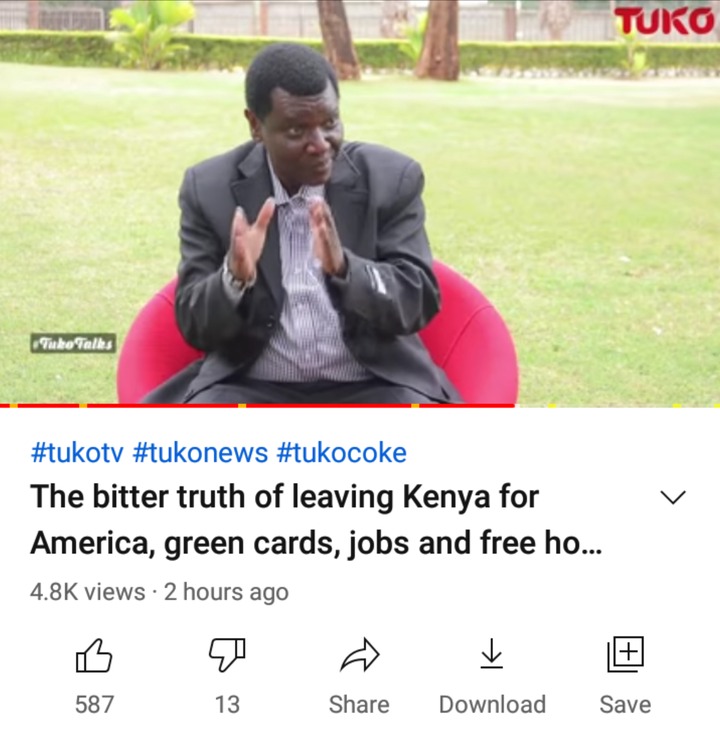 Never Loose This Kind Of Person In Your Life

Huge Blow to Ruto After New Party Starts Campaigning in His Backyard, Dismisses His Economic Model