IEBC Interviews: Candidate Who Got Degree in 6 Months Grilled

By kenya.newszjunky.co.ke (self media writer) | 3 months ago 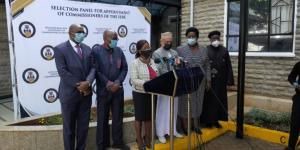 A candidate seeking to become a commissioner for the Independent Electoral and Boundaries Commission (IEBC) was on Wednesday, July 21, put on the spot after the interview panel realised he had obtained a PhD in just six months and from a university whose existence was in doubt.

The panel led by Chairperson Dr Elizabeth Muli wanted to know how Salim Ndemo managed to get a Master's and a PhD degree within six months.

According to academic papers submitted in his application, he was awarded a Master's Degree in Busines Administration on August 15, 2008, and subsequently a PhD on January 30, 2009.

"I know the kind of effort and time and sweat that goes into preparing and getting a PhD. I am curious to know how you got yours in 6 months," Muli remarked

The panel also raised concerns on how he managed to complete his two post-graduate degrees in such a short time despite working full time at the Public Service Commission (PSC) between 2003 and 2009.

In his response, Ndemo stated that he had a very flexible timetable and was able to do them simultaneously, one after the other.

He further explained that he was able to complete his PhD in such a short time as he had a proper grasp on his research topic: provisional administration since he had already authored a book about it.

The panel also sought clarification on the validity of his PhD stating claims that the university which awarded him the degree was not accredited.

"Just to inform you that when we went online, we found that this university is unaccredited and is registered in the British Virgin Islands, I don't know if you are aware of that?" the panel chairperson questioned.

Ndemo stated that when he enrolled for the programme, the university was enrolled in Delaware. He explained that the degrees are notarized(validated) which means the government is aware of its activities even if the university did not comment on the contents of that.

While talking about his experience, Ndemo revealed that while working as a District Officer, he served as a District Registrar of Persons in West Pokot under in the Ministry of Home Affairs.

This was when the government had rolled out the mass issuing of national identification cards to men and women in the country above the age of 18.