Is TSC Punishing Teachers? Here's A Sad Story Of A Teacher Who Was Given Transfer Letter In Hospital

In the past few weeks, dozens of teachers have 'suffered' as Teachers Service Commission CEO Nancy Macharia cracks the whip on a certain group of teachers who appeared defiant. 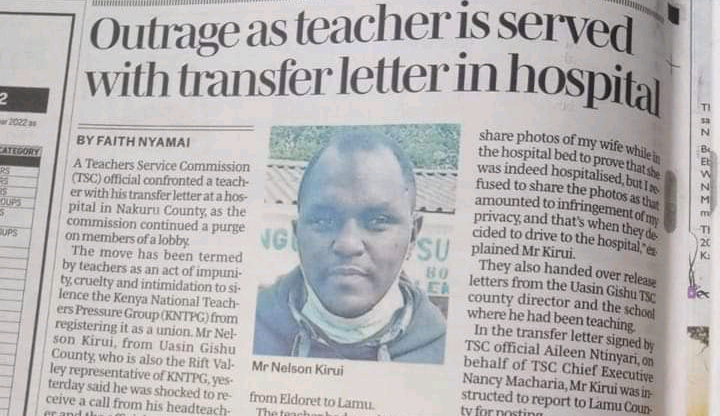 One Mr. Nelson Kirui is the latest teacher who suffered the merciless move by the Chief Officer. According to Daily Nation, Kirui was offered a transfer letter while in hospital.

This was a move seen to punish teachers of a lobby group identified as Kenya National Teachers Pressure Group. Mr. Nelson Kirui, the Rift Valley representative of the lobby was served the letter while in hospital in Olenguruone, Nakuru County.

The teacher said he was shocked to be called by his headteacher and TSC official telling him to step out of the hospital to take the letter.

He wondered how could the officials travel a distance of 200kms from Eldoret to Nakuru to serve him the letter while he was waiting for his wife to deliver a baby.

The teacher who has since been moved to Lamu said it was heartless to be brought the letter from his work station to where he had gone miles away.

He said he had sought permission from the school head to take his wife to the hospital. But while awaiting for her to be out of theater, the officials to called. He asked them to come see his wife but they refused and maintained, "Our work was to only deliver the letter."

After receiving, they ordered the driver to take photos of the three of them, one of the officials identified as Mr. Ndar also took photos while Kirui was signing to prove that he had received.

He added that before they came, Mr. Ndar asked him to send him photos of him while in hospital with wife but he refused citing it to breach of his privacy.

As many teachers continue to receive the same fate, the group has said the move is cruelty and impunity which TSC uses to silence them.

Ryan Mwenda Aka Simba of Zora Celebrates His 14th Birthday

Mudavadi Fires Back At President Uhuru On Disappointment claims

Netizens Left In Shock By Fahyma's Confession About Marrying Herself