By @arapoutta (self media writer) | 2 months ago

Ezekiel Machogu was born on 1st January 1956. He is a Kenyan politician who is currently serving as the Cabinet Secretary for the Ministry of Education after being nominated by President William Ruto. 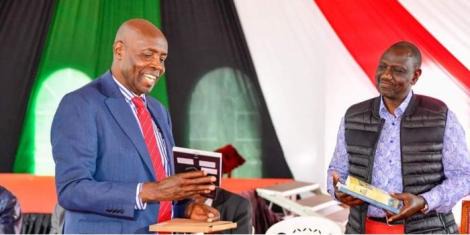 Ezekiel Machogu attended Nduru high school and later completed his O levels at Agoro Sare Secondary school in 1975. In the year 1976 to 1979 Machogu attended The University of Nairobi where he studied Bachelor of Arts in Business Administration.

Ezekiel started his career in the office of the president as a District Officer from 1976 to 1979. lhe became the District Commissioner until 2008. Machogu served as a Senior Deputy Secretary in the public service commission until 2016. Later in 2017, he served in the Kenya National Assembly as a Member of Parliament of Nyaribari Masaba Constituency. Machogu has been a member of the Committee on Regional Integration and a member of the Members Services and Facilities Committee in the 12th Parliament

Compared to the Former CS George Magoha, Ezekiel Machogu's level of education and experience is quite below the expectation of the public. Unlike Maghoha who had several undergraduate degrees, Masters and PhD, Machogu has only acquired undergraduate degree in Bachelor of Arts in Business Administration.

Having gone through his background, I think President Ruto chose Machogu because of his experience in government administration. Meanwhile, according to you, Do you think Machogu will run the education sector more perfect than his predecessors like Prof Magoha and Fred Matiang'i? Drop your comment, Your opinion counts.