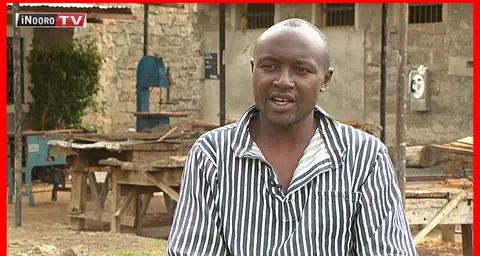 Peter Thumbi has emotionally narrated how his father sent him to jail for 3 months. In a candid interview with Inooro TV's Simon Kibe, Peter narrated that he was a bright student. He scored 422 marks at Naivasha boarding and got an admission to Thika High School.

However, due to exam irregularities, he ended up with a B plain of 63 points. At the time, the cut off points to join university was B plain of 65. He attempted suing KNEC but lawyers advised him to let go off the case since it would cost him over 1 million Kenyan shillings, an amount he could barely raise.

His father pittied him and paid a Bachelor of Commerce Self Sponsored course for him. He went to University optimistic that he would succeed and get employed in the banking industry.

However, in University, he got into bad company and his rogue friends introduced him to drugs. He ended up dropping out after being a serious drug addict.

At home, he would steal his father's household items, sell them at a throw away price so as to get money for the drugs. His father tried his best to take him to rehabilitation centers but he would go back to drugs immediately after getting out.

With time, his father got tired of his theft and sued him. He ended up being jailed for 3 months.

Peter says jail life has been hard. He has learnt his lesson the hard way and will never go back to his old habits. Once out of jail, he plans to go back to University to complete his degree and become a useful person in the society.