Newspapers: Reprieve For Parents On Fees, Ruto Leads As Uhuru And Raila Trail In Listing Of Voters.

By @yokeabu (self media writer) | 3 days ago

The main headline is on school reopening for term two whereby all primary and secondary schools students are supposed to report.

Reopening is taking place at a time when most parents are struggling financially with a majority having lost jobs and businesses courtesy of covid-19.

Besides, parents had just a week to look for fees unlike before following the shortening of school calendar by nine weeks.

Nevertheless, parents can smile as the ministry of education has already sent capitation money to schools to help jumpstart programs.

The CS education professor George magoha has already warned principals against sending away students for fees.

The government dispenses capitation money in the ratio of 50:30:20 across the three Terms to all public schools.

Each student is entitled to Ksh 22,244 from the government for the whole year. Parents with children in boarding Schools are supposed to pay fees as shown below.

National schools and extra-county schools in major towns like Nairobi, mombasa, Kisumu, Nakuru, Thika and Eldoret will are supposed to pay ksh 45000 while the rest are required to pay only Ksh 35000.

In another story, the ODM leader Raila odinga has moved in to forestall nominations fallout expected when the party holds it's primaries.

ODM has been in the past associated with bangled primaries especially in Raila Odinga's backyard leading to bitter fallouts. 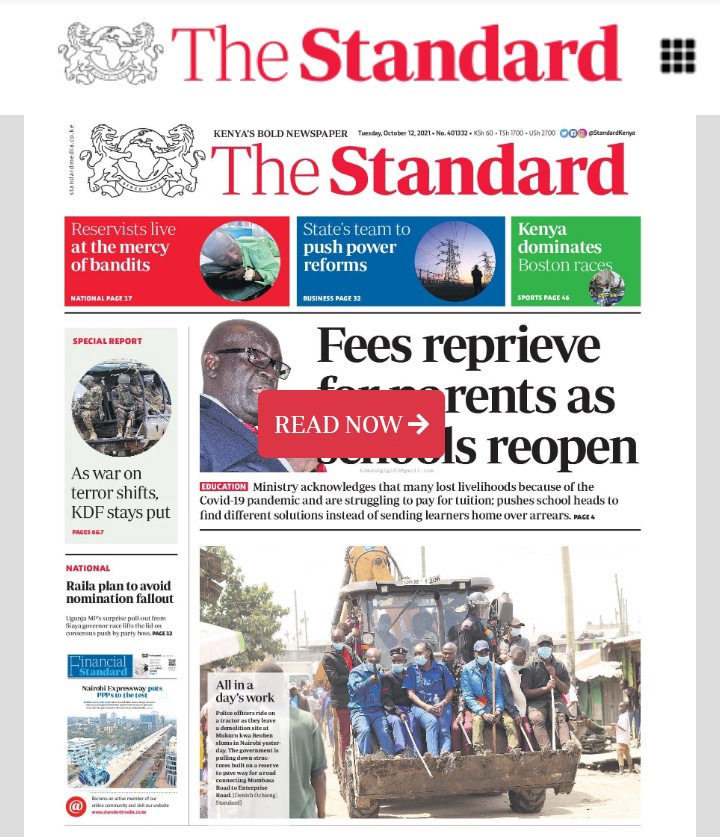 The main headline in taifa Leo is about voters registration whereby the deputy president William Ruto's backyard counties are leading in voter listing.

This isn't the case with registration in president Uhuru's political turf where the exercise got off to a slow start with kiambu registering only 2334 voters.

The deputy president will be making his first stab at the presidency hence the good show in registration will go a long way in boosting his chances with the larger rift valley boasting of the biggest population.

He should however be worried of low registration in central Kenya where he enjoys a huge following because this may translate into voter apathy in 2022.

The slow start to the registration exercise has forced Dagoreti MP Simba Arati who is eying Kisii gubernatorial seat to promise a soda for any newly registered voter.

In another story, Mombasa governor Ali Hasan Joho has asked court to throw out contempt charges that are threatening his political career. 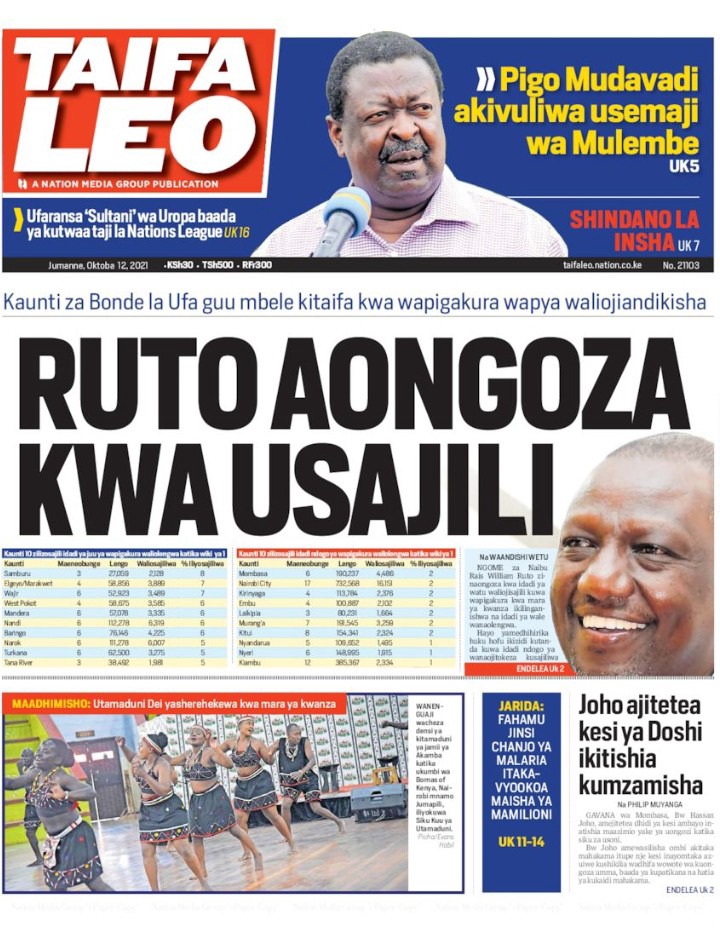 The main headline is about gender whereby 23 women have declared interest in running for gubernatorial seats in next year's general election.

Kirinyaga Governor Ann waiguru will be battling it out with the current women representative Purity ngirici.

Others are charity ngilu who will be defending her seat, Perris Tobiko who will be seeking to unseat governor Ole Lenku of kajiado among others.

The daily Nation has also run a story on the reasons why cooking gas is costing an arm and leg.

According to the paper, the cartels in the industry have come up with mechanisms of ensuring that there are barriers to entry of new players giving them exclusive rights to supply.

Finally, kenya today will know it's fate regarding the maritime border dispute with Somalia when the international court of justice is going to give it's verdict.

However, Nairobi had earlier on indicated that it will not be bound by whichever ruling that comes from the court citing biases.

Already, Somalia delegates are in the Hague in anticipation of a favourable ruling whereby they want the border line to run south east following the land border. 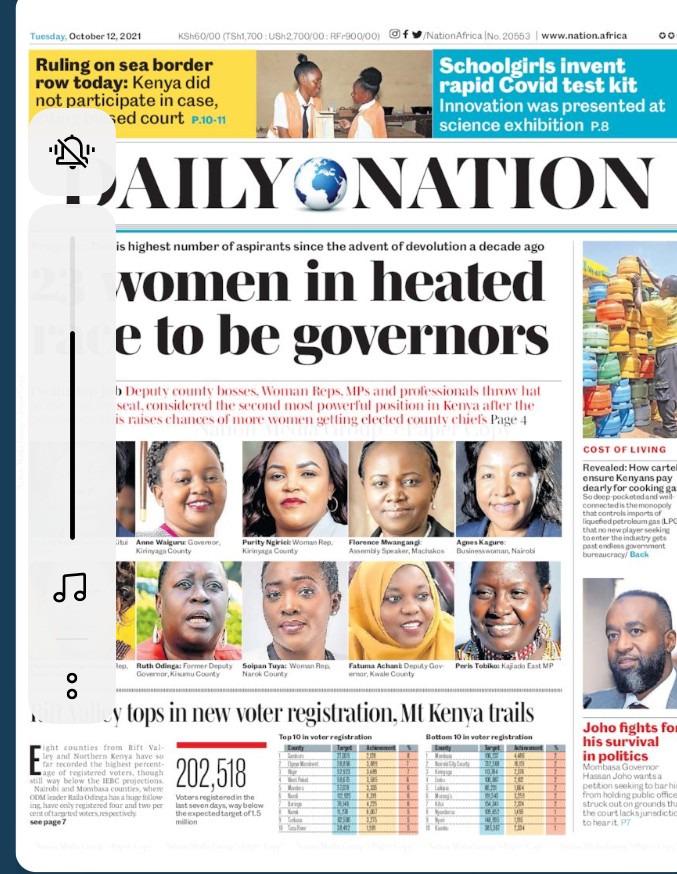 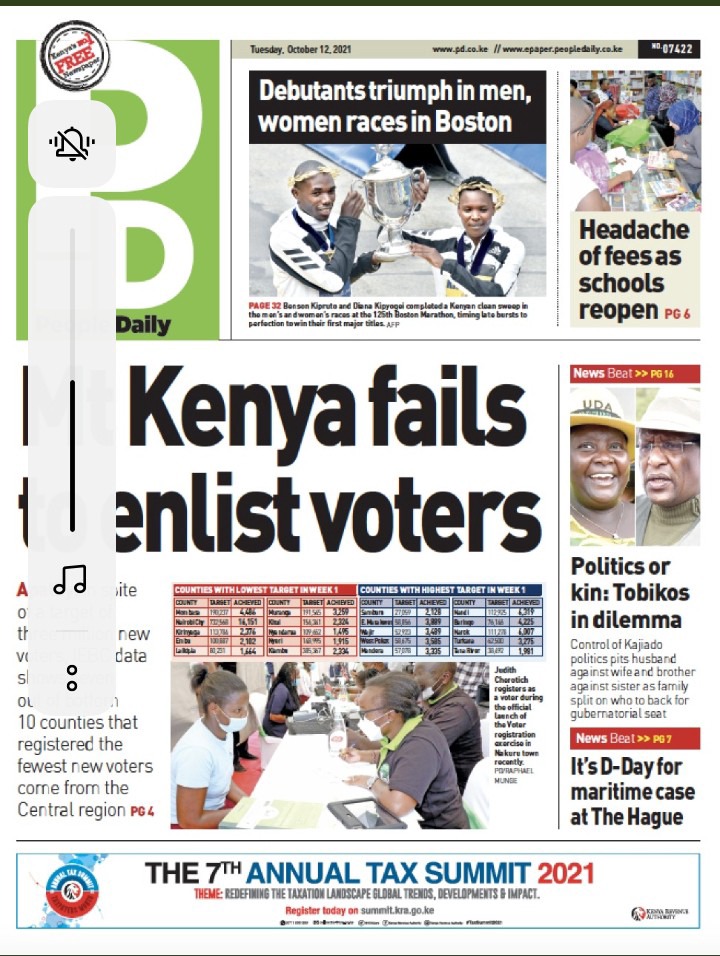 Kalonzo Musyoka who is the wiper leader and one Kenya alliance principal was yesterday in his backyard with ford Kenya leader Moses wetangula druming up support for OKA.

The duo said that OKA team will produce a president in 2022 even as pressure continues to mount on them to work with Raila. 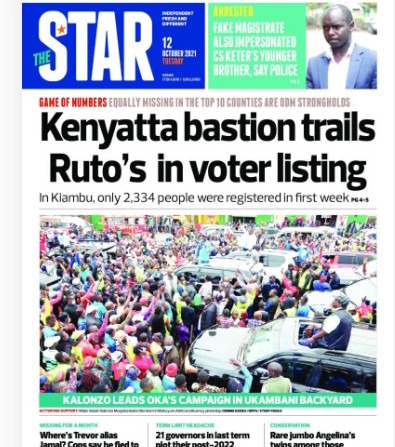 The pape reports that kenya is in default of a loan of Ksh 19bn it had taken for kimwarer dam project. 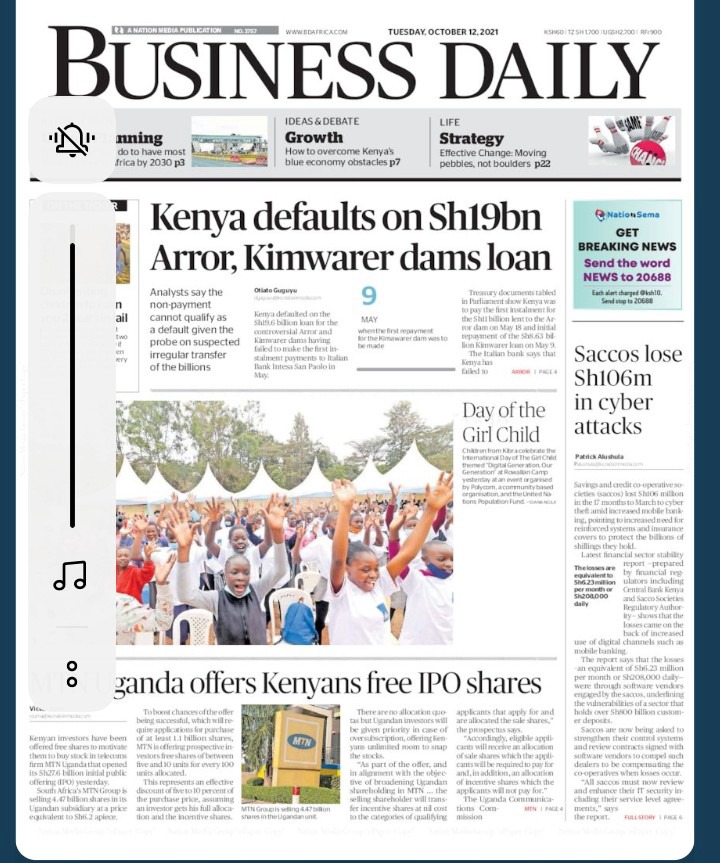