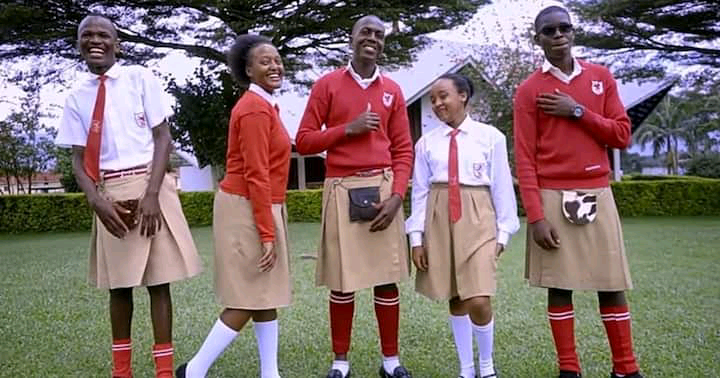 The majority of us are accustomed to seeing high school boys dressed in shirts and pants as their uniform. However, the Nyakasura Secondary School in Uganda allows boys to wear skirts.

The only school in Uganda, and possibly all of Africa, that requires male students to wear kilts for school is Nyakasura.

The principal said that they are only continuing what the founder started while outlining the history of the school.

The school was founded in 1926, according to the principal, by Lieutenant-Commander Ernest William Eborhard Calwell, a Scottish missionary.

The king of Buganda refused to adopt Scottish culture as the missionary demanded, causing him to leave the country.

In Nyakasura, he was warmly greeted and encouraged the locals to adopt Scottish culture by opening a school there.

The principal told the Rwandan newspaper Afrimax English that the clothing "builds confidence in boys, hence produces forth strong leaders; consequently, it has a unique identity."

The principal defended the uniform by asserting that it is not a skirt, as some people have dubbed it, and that kilts are a common piece of clothing for men in the Scottish Highlands.

The kilt is the only national dress of the British Isles that is worn frequently rather than only on special occasions.

Kilts have been used in warfare since World War II, when Scottish units of the British army adopted the highland dress as their uniform.

He claimed that even though the community makes fun of them, the students adore their outfits because they make them stand out.

As a mixed school, Nyakasura makes it difficult for new students to tell the difference between boys and girls.

"Everything has stopped being hilarious now that the kilt is considered standard student dress. The outfit consists of a kilt, belt, knee-high socks, and a cuff known as a kilt hose. In addition, the males dress their legs in a crimson garment known as leg warmers "he stated.

Boys' kilts also feature little bags at the front that are used to store necessities like pens and handkerchiefs.

According to the pupils, wearing a kilt is acceptable and a part of school culture.

The males claimed that although they receive constant abuse and criticism from peers at other schools for donning girls' uniforms, they see nothing wrong with the clothing.

One of the kids responded, "Some people think it's shameful to wear a skirt, but this isn't a skirt, and I also don't have an issue with it because I've been wearing it for four years already.

Along with being distinctive from other schools due to its attire, Nyakasura is renowned for doing well on national exams and has won numerous co-curricular trophy awards.

Separately, TUKO.co.ke claimed that parents urged the government to step in as schools got ready to reopen due to the high cost of uniforms.

They claimed that school administrators conspired with tailors and uniform retailers to boost profits during the rush to purchase uniforms.

The government has been urged by some to create the uniforms through the National Youth Service (NYS) and Prisons Services.

Latest Provisional Presidential Results According To Form 34B As At 8:50am Saturday

Raila Or Ruto? Latest Presidential Results For Ruto, Raila As Per The Standard Group

JUST IN: Azimio Leaders Have Arrived at KICC for a Major Event to Be Chaired By President Kenyatta