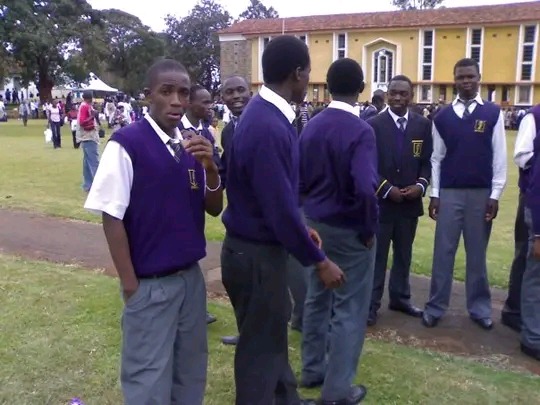 When the KCPE results were announced in 2010,I was happy that i attained the marks that I had always wished to get.For this reason,I was sure i was going to land a good school at the Capital I had chosen,and that's what exactly happened.

Days passed and the reporting day was here with us,it was the first time to be in tha Capital so you guess how happy I was.The sight of tall modern houses gave me immeasurable happiness,not knowing what awaited me.We boarded a Matatu and within 25 minutes we were at my dream school.All teachers and prefects were very busy admitting us and they appeared to be so caring while the continuing students just walked aimlessly from one corner to the other as though they were looking for something they had lost.After the days activities,my parents bid me a good bye and I stood staring them as they went, knowing that I would see them again after three months.

Life started immediately after the first day,the good prefects who had jubilantly received us turned out to be something else, they made the our lives to be so miserable such that I even started regretting as to why I had chosen the school.They used to wake us up at around 3AM so that we can clean the corridors and also do their clothes.They would then make us stand in the areas that we had cleaned upto 6AM while they were asleep.All this was to be done with or without their supervision,upon enquiry we would be told that those are some traditions of the school and there was no way we could avoid them.Failure to keep time attracted a harsh punishment ranging from been made to clean the whole dormitory the whole day to been caned by the prefects.I hope things have changed for the better because I would not like to see a form being humiliated as those guys did us.

The form twos and form threes were also not left behind,they called us all sought of names, threatening us every now and then.They had ordered us to give them our spare keys so that they would give us back whenever we lost the first pair,for this reason they had access to our boxes whenever they wanted,they would come anytime of the day and pick whatever they wanted.They would ask us to give them all the money that we had so that they would keep it safe for,not knowing that the money would not be returned,upon asking them for the money, they would turn wild claiming that you were not respectful.

The form fours were not that ruthless but we also had a role for them, they were very busy with their studies so they needed us as alarms to wake them up, every form one was assigned to a form four.No one would dare fail to do so because we clearly understood the repurcusions that followed.We would then proceed to the dining halls and bring them breakfast to their respective rooms.The good thing about the form fours was that they were friendly to us and protected us from the form twos and threes

Ten years later,am sure things have changed,the advice that I can give to parents is to make sure they guide their children in whichever decisions they make, including choice of schools.My parents had warned me against choosing that school for the abvious reasons but my friend convinced me otherwise.I lived to regret that decision for the rest of my high school life.

It is also important that students do thorough research on the schools they choose because not all schools are learner friendly.Students ought to seek assistance from their teachers so that they don't end up falling into the trap like i did.

Teachers also need to do more in protecting the newly admitted students in schools.The schools must put strict measured to address this problem once and and for all, because as far as am concerned, the teachers must have been believing that was the culture of the school because I did not see any one of them coming to our assistance.Such primitive cultures should also be done away with from our schools because they bring more harm than good, otherwise the habit of bullying will continue rising day in day out.

Content created and supplied by: Frank4 (via Opera News )