By Dr.proffnyacoma (self meida writer) | 26 days 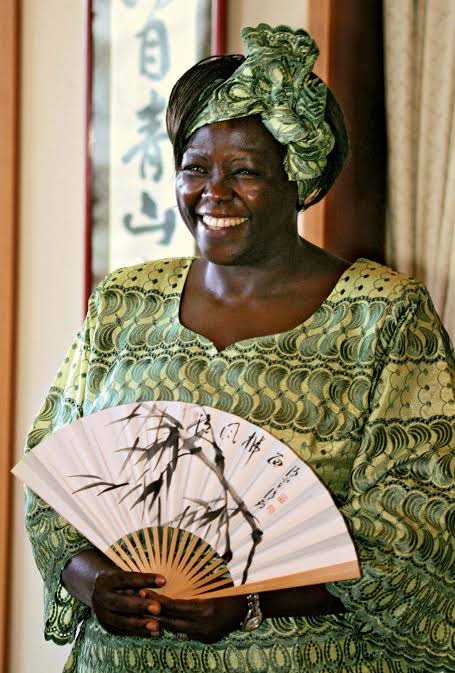 Wangarĩ Muta Maathai was a Kenyan social, environmental, and political activist and the first African woman to win the Nobel Peace Prize.

As a beneficiary of the Kennedy Airlift she studied in the United States, earning a Bachelor's Degree from Mount St. Scholastica and a Master's Degree from the University of Pittsburgh.

She went on to become the first woman in East and Central Africa to become a Doctor of Philosophy, receiving her Ph.D. from the University of Nairobi in Kenya.

Maathai was born on 1 April 1940 in the village of Ihithe, Nyeri District, in the central highlands of the colony of Kenya. Her family was Kikuyu, the most populous ethnic group in Kenya, and had lived in the area for several generations.

Around 1943, Maathai's family relocated to a White-owned farm in the Rift Valley, near the town of Nakuru, where her father had found work.

Late in 1947, she returned to Ihithe with her mother, as two of her brothers were attending primary school in the village, and there was no schooling available on the farm where her father worked. Her father remained at the farm.

Shortly afterward, at the age of eight, she joined her brothers at Ihithe Primary School.

At the age of 11, Maathai moved to St. Cecilia's Intermediate Primary School, a boarding school at the Mathari Catholic Mission in Nyeri.

Maathai studied at St. Cecilia's for four years. During this time, she became fluent in English and converted to Catholicism. She was involved with the Legion of Mary, whose members attempted "to serve God by serving fellow human beings."

Studying at St. Cecilia's, she was sheltered from the ongoing Mau Mau uprising, which forced her mother to move from their homestead to an emergency village in Ihithe.

When she completed her studies there in 1956, she was rated first in her class, and was granted admission to the only Catholic high school for girls in Kenya, Loreto High School in Limuru.

As the end of East African colonialism approached, Kenyan politicians, such as Tom Mboya, were proposing ways to make education in Western nations available to promising students.

John F. Kennedy, then a United States Senator, agreed to fund such a program through the Joseph P. Kennedy Jr. Foundation, initiating what became known as the Kennedy Airlift or Airlift Africa. Maathai became one of some 300 Kenyans selected to study in the United States in September 1960.

She received a scholarship to study at Mount St. Scholastica College (now Benedictine College), in Atchison, Kansas, where she majored in biology, with minors in chemistry and German.

After receiving her bachelor of science degree in 1964, she studied at the University of Pittsburgh for a master's degree in biology. Her graduate studies there were funded by the Africa-America Institute, and during her time in Pittsburgh, she first experienced environmental restoration, when local environmentalists pushed to rid the city of air pollution.

In January 1966, Maathai received her MSc in biological sciences,[16] and was appointed to a position as research assistant to a professor of zoology at University College of Nairobi.

Upon returning to Kenya, Maathai dropped her forename, preferring to be known by her birth name, Wangarĩ Muta.

When she arrived at the university to start her new job, she was informed that it had been given to someone else. Maathai believed this was because of gender and tribal bias.

After a two-month job search, Professor Reinhold Hofmann, from the University of Giessen in Germany, offered her a job as a research assistant in the microanatomy section of the newly established Department of Veterinary Anatomy in the School of Veterinary Medicine at University College of Nairobi.

In April 1966, she met Mwangi Mathai, another Kenyan who had studied in America, who would later become her husband.She also rented a small shop in the city, and established a general store, at which her sisters worked.

In the spring of 1969, she returned to Nairobi to continue studies at the University College of Nairobi as an assistant lecturer. In May, she and Mwangi Mathai married.

Later that year, she became pregnant with her first child, and her husband campaigned for a seat in Parliament, narrowly losing. During the course of the election, Tom Mboya, who had been instrumental in founding the program which sent her overseas, was assassinated.

This led to President Kenyatta effectually ending multi-party democracy in Kenya. Shortly after, her first son, Waweru, was born.

She completed her dissertation on the development and differentiation of gonads in bovines.Her daughter, Wanjira, was born in December 1971.