Today's newspapers has reported heavily on the political developments as the clock quickly ticks towards 2022 general election.

The Swahili publication has trained it's guns on how Supporters of the leading politicians have gone silent since the death of BBI.

According to the paper, Supporters of president Uhuru Kenyatta and Raila Odinga have gone into hiding following the court of appeal decision to slam brakes on BBI Constitutional amendment initiative.

In another story making headlines, teachers have difered with their unions on a move by their employer TSC to take them back to class at their cost.

The program will see tutors in basic education to go through refresher courses to have their certificates renewed.

The move was supported by the teachers' unions KUPPET and KNUT Whose top leadership was present and hailed it as a new milestone.

Its not clear how Teachers' Opposition will affect the rollout given their unions have already endorsed it. TSC deals with teachers through their elected representatives.

In yet another story, western elders have Supported Mukhisa kituyi's bid to run for presidency in next year's general election.

The function was attended by among others NARC Kenya leader Martha karua and makueni governor Kivutha kibwana.

And finally in sports, arsenal will today host their London rivals tottenharm in a London derby which is a must win for both teams.

Arsenal will be banking on it's confidence gained from the back to back Victories it has had to get the three points at home.

Tottenham on the other hand will be seeking to regain it's momentum following a humiliating loss to Chelsea in last week's other London derby. 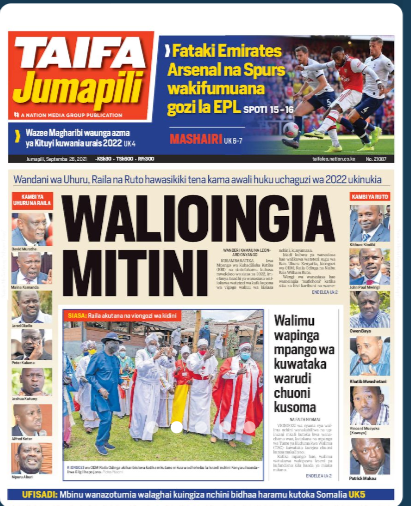 The nation has focused on how Politicians have divided Kenya into tribal blocks while they pretend to be leading national out fits.

Every leading Presidential contender has a strong hold comprising of his tribesmen whom he has brainwashed.

The is despite the fact that Kenya deserves to have Political parties with national Outlooks and not tribal.

In another story, former leader of Majority in the national Assembly Aden Duale has finally broken his silence on current politicsl developments.

Speaking to the nation, Duale has come out to state categorically that his fellow Politicians can't be trusted anymore.

His admission on mistrust for Ruto will be a blow to hustler nation given that Duale has been all along the closest and dependable ally of the DP.

URP was Ruto's party before it was folded to form jubilee Alliance. Is Duale following in the footsteps of Kaparo?

Although he hasn't come out clearly to state whether he will run in 2022, Raila's recent activities betray the fact that he will be on the ballot. 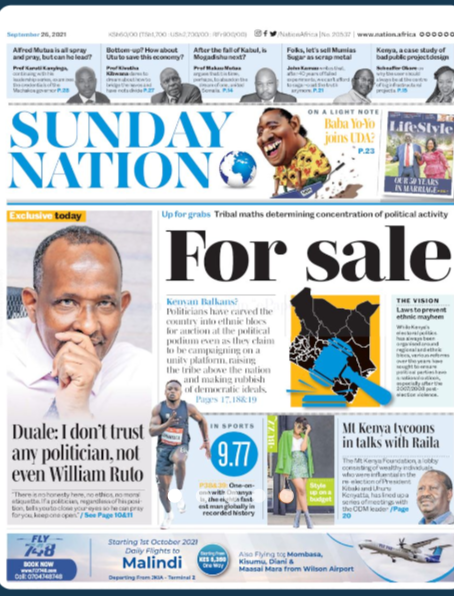 The standard reports the role of youths and social media in next year's general election and how the two will decide the outcome.

Youths form the largest voting block in the country hence the reason why leading presidential contenders are trying their level best to win them.

Both Deputy president William Ruto and ODM leader Raila Odinga have come up with manifestos targeting the youths whereby they have given a raft of promises.

Furthermore Ruto and Raila are very active on social media with Ruto's following on Twitter standing at 4.1million followers.

In another story, the standard has unraveled the con games in Nairobi's central business district where people get swindled by pata potea con artists.

For more of these stories, get yourself a copy of your choice. 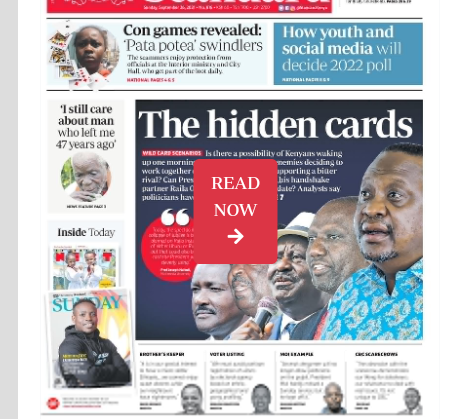 Currently Nairobians only Put on Masks When Going to the CBD