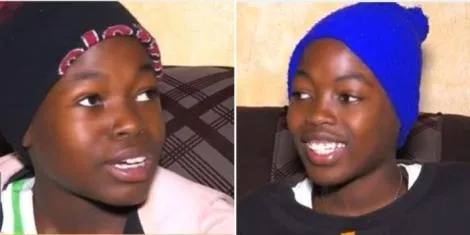 In a press briefing, Babu revealed that he would be paying school fees for twins Brian Nyamache and Mercy Bunareli who are yet to join secondary school due to lack of fees.

The lawmaker confirmed that Brian and Mercy were from his constituency and had not known of their plight until their plight was highlighted. He added that their mother, a single parent was unable to raise fees for them.

"When I saw their story on TV yesternight, I decided to look for them in Tassia. I want to assure Kenyans and the people of Embakasi East that I am going to educate these children," the legislator stated.

"I am going to give them a scholarship so that they can learn from form one to form four without paying any single cent. I can assure them that education is the key and will help you help your families," he added.

Their mother, Grace Mukabana admitted that she is unable to pay school fees for her children as she lost her job. Furthermore, the woman is overwhelmed by the high cost of living with her menial jobs not paying enough to foot bills and pay school fees.

"I lost my job in 2021, and have been doing laundry jobs for sustenance. It is not enough and I even struggle with rent and rely on well-wishers to step in," Mukabana stated.

Mukabana explained that attending the school was facilitated by a well-wisher, who catered for their fees after their father passed on. Efforts to secure other scholarships also proved futile.

"Everyone keeps on asking us why we have not yet reported to school and I tell them that we will," Mercy stated. "I also have a friend who is in the same situation as me, we meet up sometimes and encourage each other," Brian added.

Brian declared that he aspires to pursue a degree in surgery in future while his sister wants to become a lawyer. With the scholarship in place, the two ambitious students now have a chance to chase their dreams.

Things Get Messy As Ruto Puts Raila & Wajackoyah Aside, Names His Main Competitor in August Polls