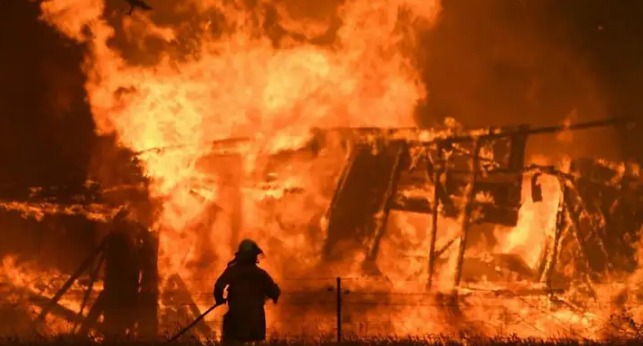 At least 40 students across the country are in police custody as the government embarks on disciplinary action against those responsible for the unrest witnessed in the past month.

Students from Timbila and Nyang'ori secondary schools in Taita Taveta and Vihiga counties were arrested earlier on Monday with petrol on the school grounds and will face charges of attempted arson.

This comes after Maranda High School in Siaya was closed indefinitely following the Sunday night fire that razed down part of the school's dormitory.

178 students were affected as the 9 pm fire consumed all the belongings in one wing of the building before it was contained.

Six students were arrested after being captured on CCTV cameras roaming around the dorm moments before the fire broke out.

17 students from Nyang'ori Boys' High School in Vihiga County were arrested after being found in possession of liters of petrol and kerosene and will face charges of attempted arson.

Six more students were also nabbed at Kagumo High School in Nyeri County and three others at Timbila Boys high school in Taita Taveta with petrol and matchboxes in what police are treating as a plot to commit arson.

Eleven students from Kagumo and Kiandu secondary schools are preparing to take plea today, over charges of attempted arson at a Nyeri court.

In Nairobi County, a section of students reported to Buru Buru Girls High School in the phase of reopening, with forms one and two expected to report back on Tuesday.

Parents, however, complained about the stringent conditions issued by the school administration.

Each student is required to report back having cleared the term two school fees and an additional Sh1500 as a fine to repair the dormitory that caught fire last Sunday.

Uhuru's Handlers Sense Danger, Warns What Will Happen To Him If He Kicks DP Ruto Out Now

Have You Seen Her? Form Four Student From Popular High School Reported Missing