The DP, who had been to the school to commission a few improvements such as additional classrooms and a laboratory, was taken aback by a daring kid who pulled a daring act on him when he least anticipated it.

He had just returned from inspecting a laboratory and was going to address the entire school when a microphone malfunction spurred the female student who was singing for him to take action to spare him from shame.

While in a dancing mood, the student bravely approached the DP and extended a hand to greet him, but instead grabbed his hand and pulled him away in a gesture that read, "Join me on the dance floor."

Even though he appeared shocked, the DP followed the student's lead as she led him up the path, and when they reached a suitable position for dancing, she released his hand and walked ahead to entertain him.

As shown below, the DP joined her in the dance despite the fact that the dance floor was covered in mud, and their performance drew acclaim from the other students, teachers, and the DP's friends.

To maximize the time available, the student did not leave it there, instead leading the DP to a gathering of other students singing and dancing on an elevated ground.

The student's decision to join those other students was most likely for a photo op, and after dancing for a bit, the student whispered something to the effect of "it's okay, you can leave now" into his left ear, and the DP exited to continue with his day's schedule. 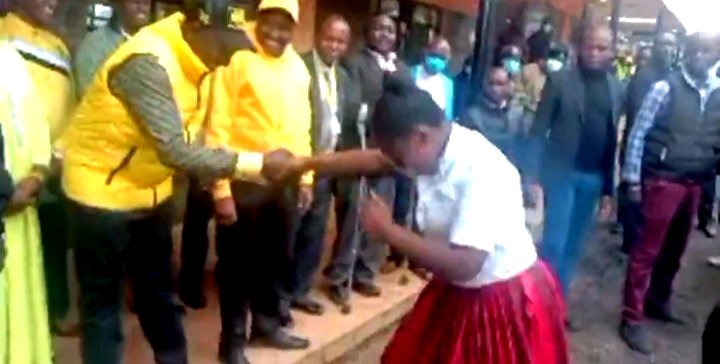 "We Are Pregnant" The Wajesus Family Announces Their Second Pregnancy In Style.