Meet Kenyan Student with Longest Running African Newspaper in US 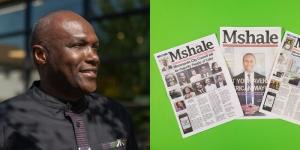 In 1990, Tom Gitaa, an ambitious student from Mombasa, left the country after landing an opportunity to advance his education in Minnesota, US.

With big dreams of making it abroad and supporting his family back in Mombasa, Gitaa did not even at one point envision himself venturing into the media industry. He only wanted to earn his degree and board the next flight back home.

However, life did not take that trajectory. He was compelled to stay a little longer in the US. This was a blessing in disguise. Gitaa's extended stay in the US opened up a business opportunity for him.

His decision to venture into news business was informed by a lot of reforms that were happening in Africa including leaders pushing for democracy and ending dictatorship.

"In the ’90s, there were a lot of reforms happening in Africa. People were trying to get rid of dictatorships and multiparty democracy was taking hold. Everybody was hungry for the news from back home," Gitaa stated.

Capitalising on the demand by Africans to consume news, Gitaa, a fresh graduate started Mshale, a newspaper for and about African immigrants in Minnesota.

In 1996, he began compiling news from East Africa into a two-page summary he called Mshale the Swahili word for arrow, symbolising the hunt for the truth. He distributed the fledgling publication by mail to a handful of friends and acquaintances.

"I would spend the weekend putting the digest together. Then I would go to a Kinko’s in Roseville on Monday and print two-pages on 11-by-17 paper," Gitaa explained.

Despite the business picking up in Minnesota, he kept it as a side hustle for about a decade. His full time job was at a call center for rental cars.

The publication continued gaining traction forcing Gitaa to hire more people and increasing the Mshale newspaper to eight pages from the initial two pages of the publication.

In 2001, Gitaa decided to professionalize Mshale operations. He contacted a printing company that started printing Mshale on standard newsprint.

He moved to a monthly publication schedule and began to give away the paper for free, with drop-off spots in the African markets in St. Paul, Minneapolis, and Brooklyn Park.

The business at that point relied on advertisers shifting from paid subscriptions to generate revenue.

The decision was informed by his understanding of digital space and readers' behaviour in news consumption. At that point, news outlets from Africa were accessible to the people, and internet connections became ubiquitous.

"News outlets in Africa were suddenly accessible to people in Minnesota, which made Mshale’s summaries of news from the continent “a little bit redundant," Gitaa explained.

Despite facing a myriad of challenges, Gitaa has managed to keep Mshale afloat for over 25 years becoming the longest-running newspaper in Minnesota.