Bad News As Wilson Sossion reveals the secret behind his resignation from the Kenya National Union Of Teachers (KNUT). This has come when all teachers across this country have been complaining over the the directives of the Teachers Service Commission that all teachers must take refresher courses at Shs 6000. Actually the ministry of education is currently working hard to see that Competency Based Curriculum has worked well and completed the 2021 academic calendar as directed by the education stakeholders. 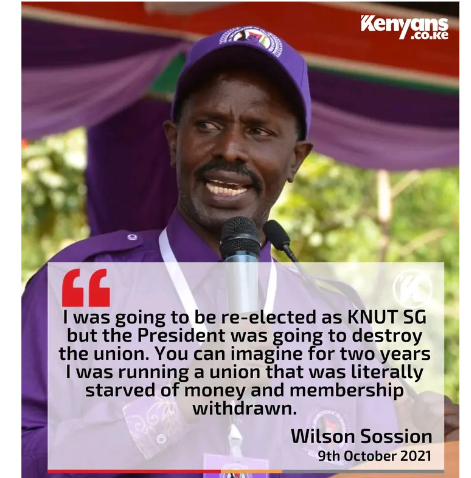 However teachers have now received bad news as former KNUT Secretary-General Wilson Sossion reveals the secret behind his resignation from the Union. Actually the former KNUT Secretary-General Wilson Sossion says that he was going to be re-elected as Kenya National Union Of Teachers Secretary-General but the President was going to destroy the union. Sossion said that you can imagine that he was running a union which was literally starved of money and membership withdrawn, something which was very difficult for him to run the union. Wilson Sossion was replaced by Collins Oyuu after Sossion officially resigned from the Kenya National Union Of Teachers (KNUT). This sounds as bad news to the teachers in this country.

Content created and supplied by: Bundii (via Opera News )