A first class degree from a reputable university is what many undergraduate students long for. If wishes were horses, beggars would ride.

The degree unfortunately is a preserve of a select few who are extremely hardworking and somehow lucky enough.

Whenever that happens, some mortals would like to let everyone who cares to listen, here their success stories and acknowledge their high IQ.

That is what happened to one Babu Owino who is mp for embakasi when he took to social media to share his two degree certificates from the University of Nairobi.

The first degree in actuarial science was obtained in 2012 whereby he scored first class while the second one in law, he scored second class honours. 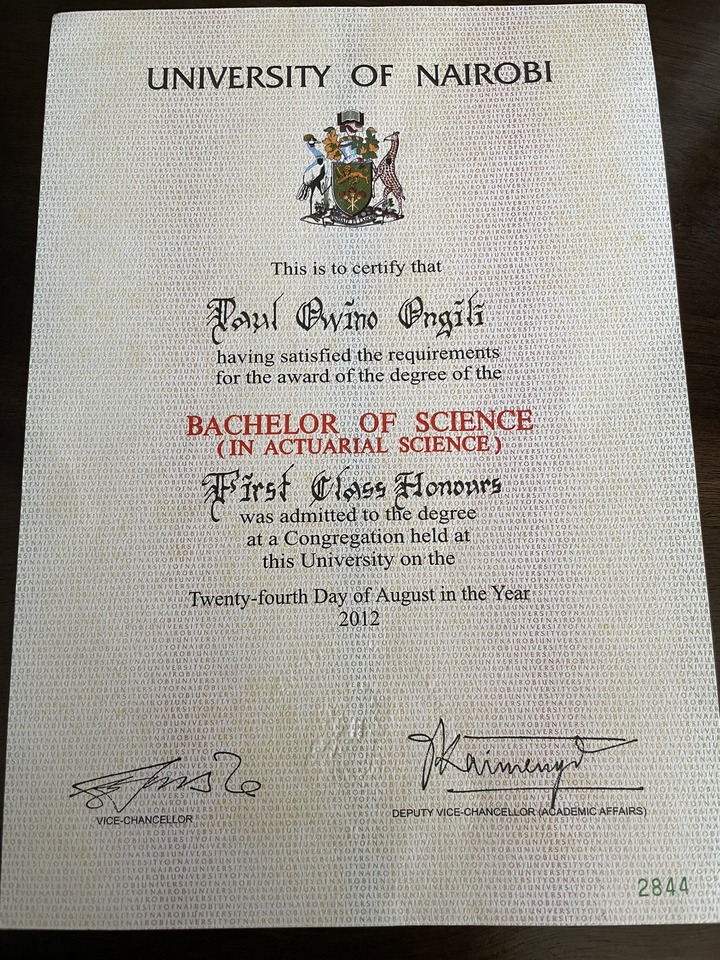 Owino did this at a time when some Politicians have issues with the authenticity of their academic papers.

In fact, some have even been dragged to court following accusations that they forged their credentials.

Now a part from Babu Owino, another prominent ODM Politician with a first class degree is kisumu Gorvenor Peter Anyang Nyongo who is serving his first term.

Nyongo obtained his first class degree in political science from the University of Makerere in late 60s. He later on pusued his master's and PhD in the same field In the university of Chicago graduating in 1977.

He later on worked as a Professor in Nairobi university and a visiting Professor in Mexican Universities and addis Ababa until 1987 when he became the head of Programs at African academy of science.

He joined the dirty game of politics in 1992 when he successfully contested for kisumu rural parliamentary seat.

The 75 year old has served as the minister for planning and development and health under Mwai Kibaki.

Before becoming a Gorvenor for kisumu, he was the senator representating the people of Kisumu county.

Babu Owino on the other hand never had time to practice as imediately after university he joined Politics.

It's still not clear whether there is a correlation between a leader's level of education and perfomance.

Do you think there is a relationship between a leader's education level and perfomance? Feel free to share your thoughts and comments on this on our comments platform.

Diseases That Are More Deadly Than HIV

Ni Mrembo: Beautiful Photos of DP Ruto's Daughter Who Was Engaged to Nigerian Tycoon on Saturday

Five Big Benefits Of Eating Chapati That You Should Know

Do You Have Consonant M On Your Palm? This Is It Means According To Palmistry