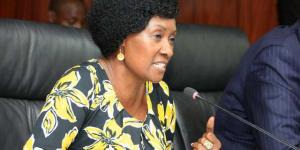 The Teachers Service Commission (TSC) has taken action against a teacher pushing for reforms and better welfare of her colleagues.

Speaking to the press on Saturday, November 13, Martha Omollo, the spokesperson of the Teachers Pressure Group (TPG) cried foul over what she claimed was an unfair transfer after she was moved from Nairobi.

Omollo stated that her transfer to Trans Nzoia County was linked to her push for TSC to revoke the current medical cover offered to teachers under Aon Minet on November 11. She revealed that while on duty at Mowlem Supaloaf Primary School in Nairobi, she was summoned to her headteachers office.

“I received a call from TSC Nairobi County director through my headteacher who told me that I should be cautious of what I say to the media and that any issues I have I should go through the teachers’ unions,” she stated.

The TPG spokesperson resumed her duty, assuming the call was nothing but an attempt to intimidate her. However, at about 4 p.m., she was informed that she had a guest.

An official from the TSC had visited the school to hand over a transfer letter, which indicated that she had been moved to Trans Nzoia County. She had also been instructed to leave the school immediately.

Omollo revealed that the school head had been informed about the transfer and already had a release letter signed by the time the TSC official handed her the transfer.

The letter signed by Fredrick Mwaniki, a TSC official on behalf of the commission's Chief Executive, Nancy Macharia, directed her to report to the Trans Nzoia TSC County Director by Monday.

“The commission has decided that you be transferred from Nairobi to Trans Nzoia County with effect from November 15 to teach all subjects,” the letter read in part.

In addition, Macharia further directed the Nairobi TSC director to inform the commission's head office that Omollo had been released from the region.

Omollo claimed that the transfer was only meant to intimidate her and send a message to other teachers. She further stated that when she inquired about her disturbance allowance, one month's salary, the TSC official gave no definite answer.

She further stated that she would take legal action on the matter but would report to Trans Nzoia County by November 15 as instructed. 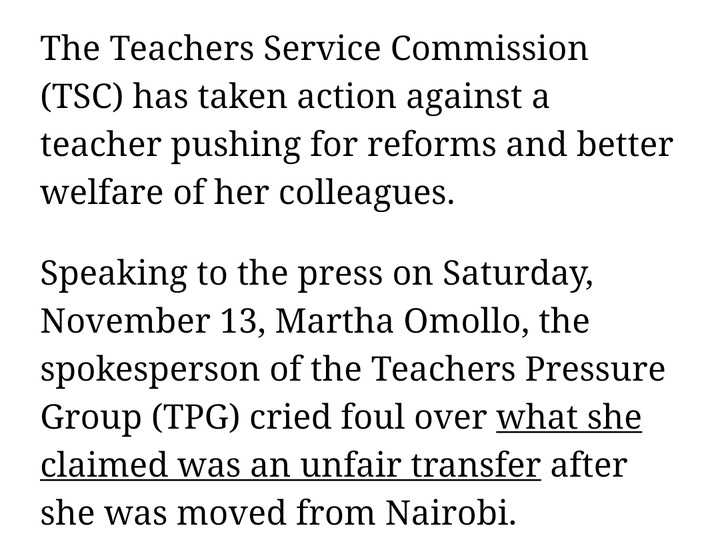