Struggles of a business trader who dropped school in class four

By MishekNg (self media writer) | 4 months ago

“I left school when I noticed pupils from Nursery class had caught up with me in Class four and couldn’t do better than them. At the age of 16, life changed as I had dropped from position 3 to 25 out of 30 pupils,” noted Muli, a food vendor in Embu town. 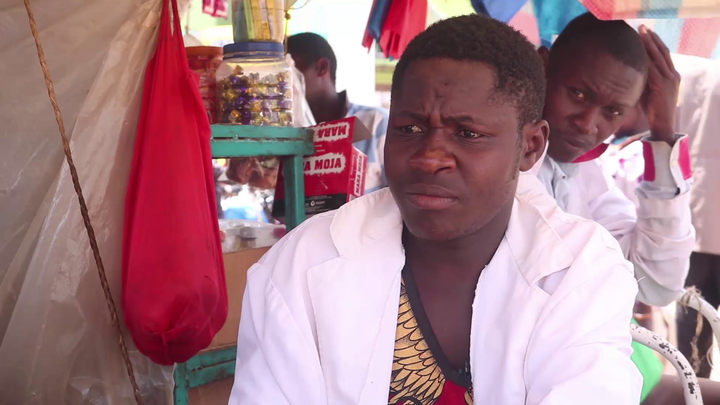 James Muli at his workplace

The high number of hawkers along the streets of major towns only depicts the unemployment status. It has become a source of employment to many Kenyans of both genders across the ages. The food vending business is surrounded by intrigues considering the numerous complaints and tales of harassment by County askaris and officers from the health department. James Muli, a father with one child, ventured into hawking eggs and sausages after abandoning his Boda Boda job, following the death of 10 of his friends through accidents. Food vending was the better option for him as he only needed sh 500 to start. The 27-year-old man from Katithini village in Kitui County dropped out of school at class four in 2008. Since then, Muli says life has not been easy as he has tried several businesses.

“I worked in a hotel located at Machang’a in Mbeere South near Kamburu dam before heading to Garissa in 2010, where I was employed to prepare groundnuts,” said Muli. Though he received sh 2,500 every day, Muli noted that preparing 100kgs of groundnuts was not an easy task and had to quit. He joined the Boda Boda industry that he worked for eight years. “I was able to purchase a motorbike as the business was booming in Garissa, but the income dropped drastically when many people acquired motorbikes. Initially, I would take home more than sh 2000, which reduced to about sh 300, and the risk was high with 10 of my friends succumbing to accidents while others attacked by thugs masquerading as customers at night,” he added. After getting married in Garissa, Muli says life became unbearable and joined his brother in Embu town, who introduced him to food hawking. “In Garissa town, my only achievement was Marriage,” he said amid laughter. He noted that the job was not easy as one would presume. Muli said venturing into food vending was a way of inviting trouble with County askaris and officers from the department of health.

“I have had numerous encounters with them and one time lost a trolley worth sh 15,000. Most times, I dig deep in my pocket to bribe my way out,” he observed. James Muli attends to a customer

He said when Covid 19 brought about new regulations. Food hawking was outlawed, and even traders with medical certificates would not be allowed to do the business. He, however, observed that he has been able to build a house and feed his family with the sale of eggs and sausages despite the numerous challenges faced. Muli now appeals to the County government of Embu to find ways to accommodate the hawkers bearing in mind the lack of jobs and employment while families have to survive the harsh economic times.

Mulamwa's Latest Photo With His Child That Has Sparked Reactions Online