Why The Old Return to Classrooms Years Later. 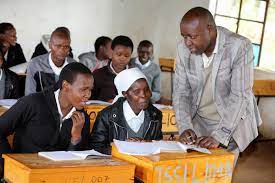 Fancy Chebwogen(right) and Naomi Chepkemoi(center) while in class receiving a concept.

Education is said to be the key to success. Furthermore, it is also said that education is the equalizer that fills the gap between the haves and the have-nots. However, the now running out education system, 8-4-4, hasn’t been of great favor to many. Termed by many as a theoretical and paperwork curriculum, it mainly kept people fixed-minded on getting office jobs once done with the campus career studies.

Here comes a man who left school 26 years ago. Martin Kimosop, a 45-year-old man, sat for his Kenya Certificate of Secondary Education (KCSE) IN 1995 at St. Daniel Kapatabuk Secondary School. He managed to attain a mean grade of C-. Kimosop lacked funds to facilitate his college education and bid bye to books.

Five years later, he began a family and was blessed with three children who have now completed the basic education. After providing for his children, he now believes it is his turn to give it another try. This time round aiming to score a grade of B+. He says he has had a library of books having English and Mathematics as his favorites.

But Martin Kimosop isn’t the only one. Neither is he the first one. In 2018, Tulwet Secondary School also had older students. Students some of whom were of the same age as their tutors. Naomi Chepkemoi, aged 30, and Fancy Chebwogen, aged 22 years, got back to class, joining form three.

Naomi says she couldn’t make it to join a secondary school after sitting for her KCPE due to a lack of finance for her fees. She later trained for tailoring, got married, and was blessed with five children. Ironically, her mother decided to babysit her young children whereas two who were in primary, were under the watch of their 32-year-old father. Naomi’s husband too agreed to pay her school fees.

On the other hand, Fancy too narrated how she dropped out of school in form two in 2015 when she got pregnant and later on got married. She said that it was her husband who came up with the idea towards the end of 2017 and she couldn’t waste that golden opportunity. 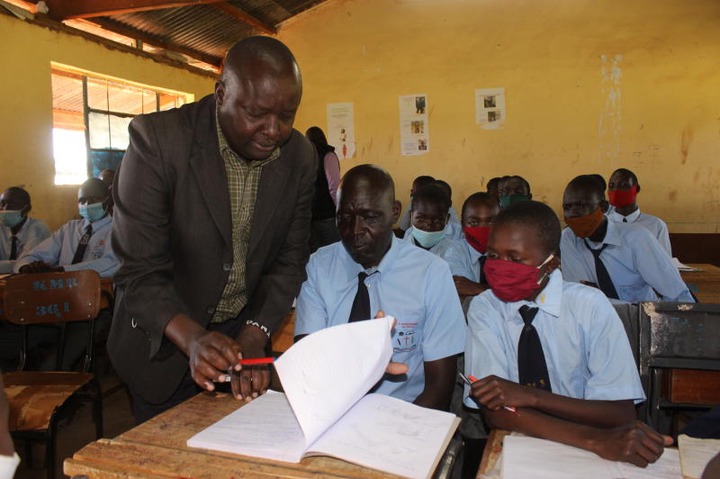 Martin Kimosop listening to an explanation by his teacher in class.

Unlike Martin Kimosop, Fancy Chebwogen and Naomi Chepkemoi still had young school-going children. It was a double task for them. It is tough as the duo say they wake up at 5 am to do house chores before leaving for school. Arriving in school as early as 6 am to do their assignments and private studies before colleagues come in.

The adult students are said to be very disciplined and honest with their teachers whenever they mess. Kimosop wants to become a journalist while the other two haven’t stated their dreams but they do.

The government has been urged to set up education centers for the aged who want to come back to school and provide adequate resources. The main challenge is that most families hail from poor backgrounds, therefore, struggling to raise fees and having the necessary equipment.

It all needs perseverance, persistence, prayers, dedication, commitment, and sacrifice. Nothing good comes easy. I believe the change of education tract in the current curriculum will help a great deal. If the old can still value education and resume classes years later, what of you who has got the opportunity now and is wasting it?