By UpdateMaster (self meida writer) | 21 days

It is always very rare for a teacher to dress in uniforms that match learners' uniform.But of it happens,the teacher is percieved to mad or out of his mind.Mr.Vincent Obaga- a 29 year old and Kiswahili/Mathematics teacher- has proved not only to his pupils, colleagues but also to the whole world that it is very much ok to be in pupils' uniform.

He has always done this since he started his teaching career.He has disclosed that this makes it easier for him to interact with the learners freely and openly.Furthermore,he even joins his pupils in their plays grounds and play with them freely.This has always mesmerized his colleagues who have found it very difficult to join him in this.

Before being posted to Urudi Primary in Nyakach subcounty in Kisumu County by TSC,Mr.Vincent was heading a private school in Narok where he worked so hard so as to scale higher the mean score which was belowe average.

After being posted to Urudi Primary,he never left this norm to fade away but approached the headteacher,Mr James Sagino, and shared with him his story and what he wanted to introduce in the school.He was given a go ahead and for sure,the headteacher has testified that there is a significant improvement in performance courtesy of this. 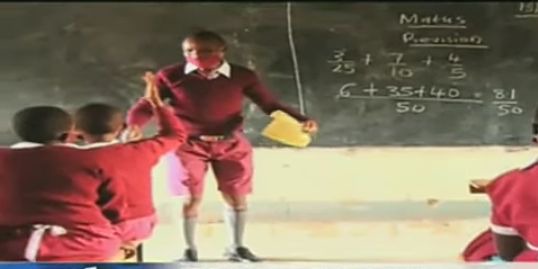 He also disclosed that his colleagues have always found it very difficult to join him in doing this.

"I had a deputy before whom I approached and requested to be part and parcel of this but told that he was a christian and therefore cooud not dress like his pupils do."He added

He has vowed never to change this mode of dressing since he fears that his pupils might start putting home clothes to school as he like a mirror to them.

Content created and supplied by: UpdateMaster (via Opera News )

Sure ways of saving power during ironing

BREAKING: Barcelona officially announce the Departure of Lionel Messi after 17 years at the Club