By kingsg (self media writer) | 3 months ago 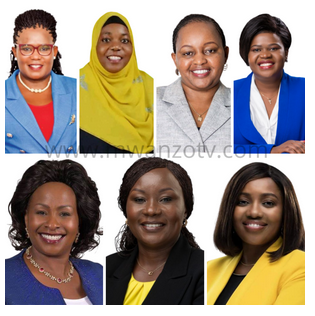 Ann Waiguru. She was born on 16,April 1971 in Kirinyaka county.Waiguru attended Nairobi River primary school and later Precious Blood girls secondary school,Riruta where she sat for her o-level exams in 1987.She then join Moi forces academy in Nairobi where she sat for her A-level exams in 1989.At Moi academy Waiguru studied mathematics,physics and chemistry,Later join Egerton university with bachelor's degree in agriculture and home economics.

Susan Kihika. she was born in 1974 making her 48 years old as of the 2022.She grew up in a large polygamous family.Her late father,kihika kimani was a prominent politician during Moi regime.She began her education in a primary school in Nyahururu called Busara Forest View Academy before she joined Bishop Gatimu Ngandu Girls for her high school education.She then moved to United States of America further learning.She enrolled in the University of North Texas Studying political science on completing her undergraduate studies, she proceeded for her Juris Doctor degree in southern Methodist University graduating with Honours that immediately earned her admission to the Texas bar.

Kawira Mwanganza. She was born in 1973 making her 49 years old as of year 2022.She studied at St Mary's Girls High school and later she graduated at Kenyatta University.She is married to Robert Murega.

Cecily Mbarire. She was born on December 26 1972 in Runyenjes in Embu county.She was a secondary school student at Sacred Hearts Kyeni Girls School Embu.She later pursued bachelor of Arts[political science] at Egerton University an undergraduate student.She also pursued a post-Graduate Diploma in Gender and Development studies at the University of Nairobi.

Gladys Wanga. She was born on 7 march,1981 making her 41 years old as of the year 2022.She grew up in a political family,where her father John Nyasuna,was one's a renowned Councillor in Kisumu county which was then known as Nyanza province.She obtained her bachelor's degree in health management from Kenyatta University in 2004 and later on graduated from kenyatta University in 2012 with master's degree in health management.

Wafinya Ndeti. She was born November 3,1967.Ndeti spent her youth years in United kingdom and it is where she schooled.She attended South Bank Polytechnic between 1986 and1990.She later proceeded to London South Bank University where studied Computer Science and Business Administration.She holds a master of science degree in computer science from South Bank University and another master of science degree in Business Administration and Marketing from Heirowatt University.

Fatuma Achani. She was born in 1984 in kwale county .She began her education at Kangwende primary school in the coastal region.She later joined the famous Mama Ngina girls in Mombasa county.She has passed secondary level and she enrolled at Moi University where she pursued a Bachelor of law.

Content created and supplied by: kingsg (via Opera News )