By Kenyanewszjunky (self media writer) | 4 months ago 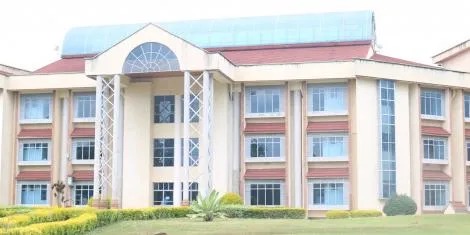 A post by Migori Senator, Ochillo Ayacko, claiming that Prof. Joseph Sarima Chacha has been appointed the new Vice Chancellor of Masinde Muliro University of Science and Technology (MMUST) has been clarified as false and malicious by the Ministry of Education.

In the Facebook post dated September 4, 2021. Ochillo congratulated Prof Chacha stating: “I pass my warm congratulations to our own Prof. Joseph S. Chacha, who has been appointed the new Vice Chancellor for Masinde Muliro University of Science and Technology.”

“I equally wish him well as he embarks on his professional duty of improving the standards of higher education in the institution, Kenya and the entire world. Cheers!""

Prof. Chacha is among seven of the 16 who applied for the position and were short-listed by the Public Service Commission (PSC) for interviews. The others include Prof. Solomon Shibairo (acting VC), Sibilike Khamala Makhanu, Kenneth Inyani Simala, Mary Abukutsa Onyango, Peter Nyamuhanga Mwita and Paul Shiundu Mwanza. 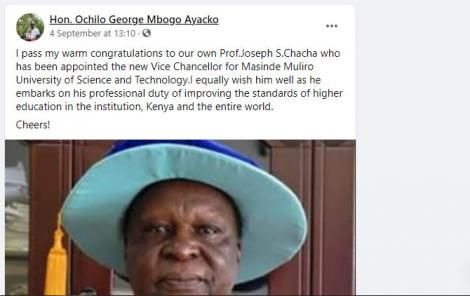 Wangwe, who stated that he was speaking on behalf of Western Kenya leaders, lamented that some of his colleagues were politicising the recruitment process.

He added that the recruitment drive by PSC was still ongoing and that shortlisted candidates would be forwarded to MMUST council who would make the final decision in consultation with EducationCabinet Secretary, George Magoha. 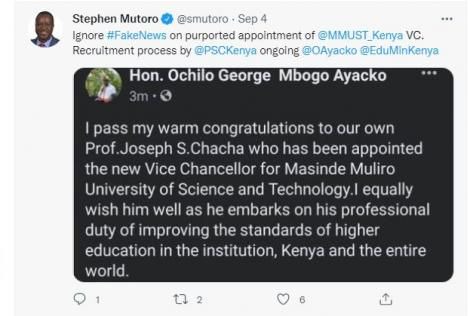 Ambassador Simon Nabukwesi, the Permanent Secretary in charge of State Department for University Education and Research in the Ministry of Education also debunked the claims by Senator Ochillo Ayacko.

Nabukwesi concurred with MP Wangwe, noting that the recruitment drive by PSC was far from over.

“The process is far from completion. Only the PSC knows how far they have gone. There is nothing substantial yet.

That is a malicious rumour (on Prof Chacha appointment). It is false and I do not know what his (Senator Ochillo Ayacko) intentions are,” Ambassador Nabukwesi clarified.

Since the exit of former MMUST VC, the late Fredrick Otieno in October 2018, the university has been without a substantive VC, according to the university website.

Three acting VCs, including the incumbent acting VC, Prof Solomon Shibairo, have been in charge. Shibairo is among those shortlisted for the VC role. Shibairo took over from Asenath Sigot, who held the position for nine months.

Sigot was preceded by Joseph Bosire who was in charge up to July 2020, from October 2018.

PSC is also seeking to fill three positions of Deputy Vice-Chancellors, which have remained vacant since 2018. These are Finance and Administration, Academic and Students Affairs and Planning, Research and Innovation.

Prof Charles Mutai is currently the acting Finance and Administration DVC. He took over from Dr Patrick Ojera in August 2020. Ojera held the position in an acting capacity since June 2018. Academics and Students Affairs has had two acting DVCs, Prof Peter Odera (incumbent) and Dr Bernadette Sabuni.

On August 21, 2021, Education CS George Magoha blamed varsity staff unions for interfering with the recruitment drive and appointment of a new MMUST VC.

“Masinde Muliro university fraternity needs to stop petty politics, which count for nothing. This is an excellent academic institution with excellent faculties. Union officials must rise above petty politics and protracted court cases that are derailing development,” Magoha urged.

Therefore, claims announcing that MMUST has a new VC are false and misleading and are politically instigated as the PSC recruitment drive is still ongoing. 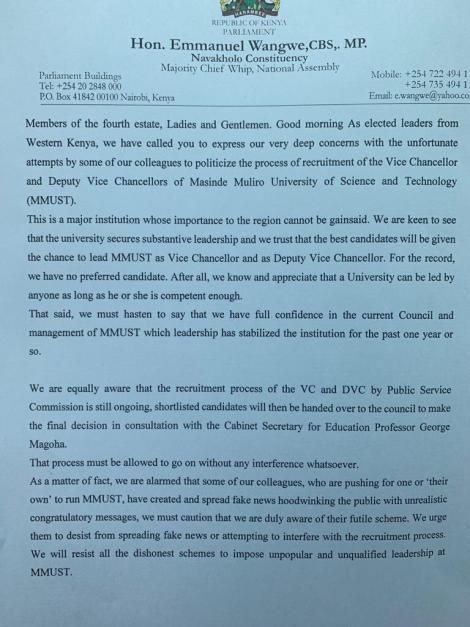 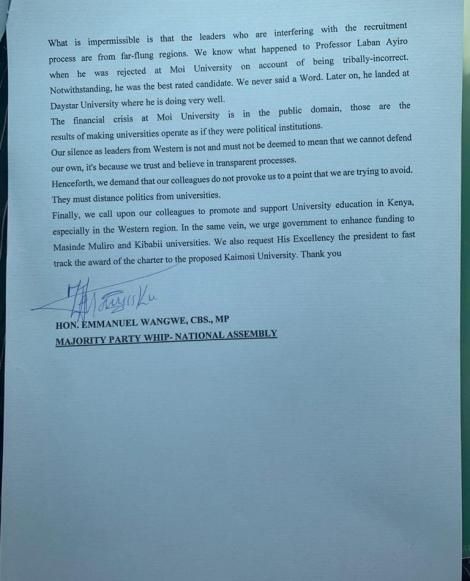