"I once wanted priesthood," Larry Madowo

By @EMBuchen | self meida writer
Published 19 days ago - 0 views 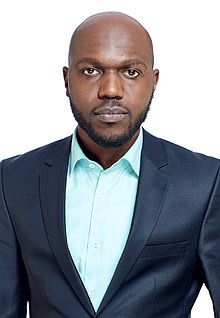 Larry Madowo is Kenya's one of the finest journalist, ranked after or just in the same range with the renowned Jeff Koinange, host at the JK Live, a popular program on Citizen TV at nine o'clock. He was born in 14th July 1987 in Siaya, Kenya. He grew up in various parts of Kenya, including Siaya, Kisumu and Nairobi. He attended Usingo and Karapul primary schools and thereafter proceeded to St Gabriel for his secondary education.

Larry Madowo intended to train as a Catholic priest but after high school, this had changed and he studied broadcast journalism in college. Larry Madowo enrolled in Daystar university, Nairobi, for a communication degree course.

Larry has worked in Bahasha FM, which gave him his first internship in 2007. He dropped out of college a half and a year down his degree to take a job at KTN, one of Africa's oldest television networks. Larry has worked for NTV hosting a popular show, #thetrend and later joined South African based CNBC as one of the main anchors for market day shows for Open Exchange, Power Lunch and Closing Bell.

On April 11 2018 it was announced that Larry Madowo was joining BBC News Africa as a business editor. He right now works for BBC. He has appeared across BBC world TV, BBC world Service Radio and BBC channel in the UK.

Content created and supplied by: @EMBuchen (via Opera News )

Jeff Koinange Karapul Larry Madowo Nairobi Siaya
Opera News is a free to use platform and the views and opinions expressed herein are solely those of the author and do not represent, reflect or express the views of Opera News. Any/all written content and images displayed are provided by the blogger/author, appear herein as submitted by the blogger/author and are unedited by Opera News. Opera News does not consent to nor does it condone the posting of any content that violates the rights (including the copyrights) of any third party, nor content that may malign, inter alia, any religion, ethnic group, organization, gender, company, or individual. Opera News furthermore does not condone the use of our platform for the purposes encouraging/endorsing hate speech, violation of human rights and/or utterances of a defamatory nature. If the content contained herein violates any of your rights, including those of copyright, and/or violates any the above mentioned factors, you are requested to immediately notify us using via the following email address operanews-external(at)opera.com and/or report the article using the available reporting functionality built into our Platform