Why CBC will End The BBI Way

The government's effort in reforming the education b sector is laudable. However in the midst of this education reform agenda the government should give a listening ear to divergent views about the introduction of the Competency Based Curriculum(CBC)

At the core of any curriculum implementation is the cog that is the teacher. It's very clear that teachers' voice has been ignored in the discussion preceding the implementation of CBC. The former cabinet secretary for education Ambassador Amina Mohamed had her reservations about the CBC . She was transferred to another ministry on suggesting that CBC implementation be shelved for a year to address some pertinent issues.

In her stead was put no-nonsense minister Pro George Magoha. His mission from the onset was to oversee implementation of CBC by force or by fire. He even almost forgot that the education docket was beyond CBC. He is on record threatening to crush anyone opposing CBC ,and not long ago , Wilson Sossion,the former KNUT secretary general was viciously fought for questioning the speed at which the CBC was being implemented. It is a fact and this Magoha should confirm,that teachers are implementing CBC to protect their jobs. The chickens are now coming home to roost with court battles against the new system. 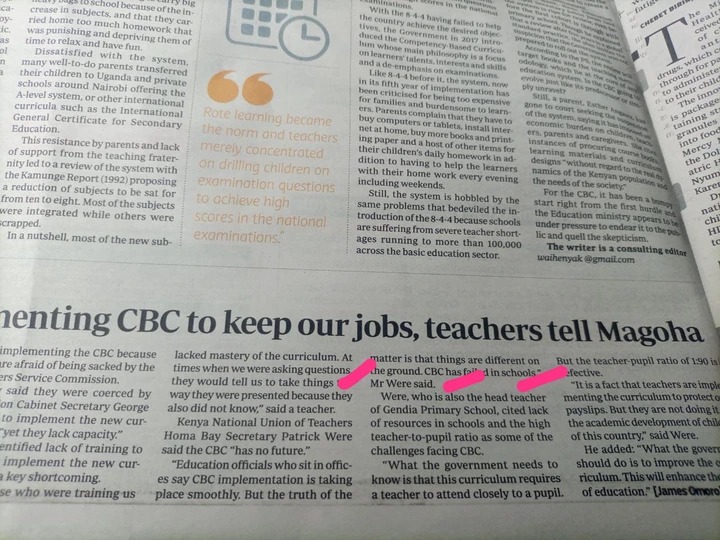 it could be true 8-4-4 has its own challenges but annulling the whole system without giving credence to its positives is unfair. The best the government should have done is to improve on the strengths of 8-4-4 while addressing the known challenge of over-reliance on exams and rote learning.

Making education reform look like a political agenda will not be beneficial at all to our children. Due process of curriculum change should be followed lest this CBC thing dies the BBI style.

Content created and supplied by: Feshly (via Opera News )