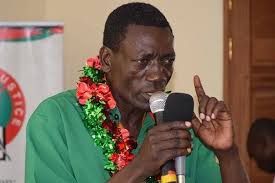 Kenya national union of teachers secretary General Collins Oyuu has said that the union has stated receiving its members back. Since the exit of Wilson Sossion, and the installation of new leadership, the union has recorded 6000 members joining. Some of these members are new while others are the old members who exited the union.

A group of primary school teachers who were in knut and had gone to school to advance their studies received nothing in terms of monetary from the employer. Those who exited the union and had advanced their studies were transfered to secondary school and their job group reviewed. Until last month, majority of these teachers had been transfered into secondary.

Sossion was oustered from the union simply because he had opposed, the TPD and also the CBC training that was introduced by the ministry of education. This was part of the curriculum review that was promised by the government and other education stake holders.

High membership of Knut is simply because of the promise that the union was given by the employer that its members will start receiving the benefits that were withdrawn during Sossion's time due to his hard stand on tsc. The new secretary genera seem to be implementing all the guidelines and directives from the tsc.

The Knut officials were divided on the TPD issue. Branch officials were opposing the training but the union officials were supporting the idea. Suddenly there was change of tune and the officials now seem to be reading from the same script.

Knut is no longer complaining of lack of union dues due to drop of its membership. Let's support our unions because they are their arbitrator between the employer and employees.

Manchester United To Raid A Rival For A Dominant Ace: Could He Be The Remedy To Rangnick's Woes?