By NewsHouse (self media writer) | 9 months ago 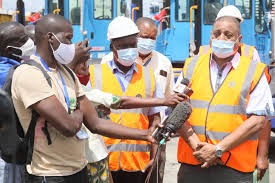 A section of workers at the Port of Mombasa have formed a splinter trade union.

The workers said they had made the decision because their rights and interests were no longer catered for by the Dock Workers Union.

They have formed Port Workers Welfare and Performance Group with Waweru Kamau as the interim Chairman.

Kamau and other interim officials said yesterday that they had lost confidence in the Dock Workers Union.

"We have lost faith in the Dock Workers Union. The Secretary-General Simon Sang has turned the union into a political outfit," said Kamau.

Speaking on phone, the official said they had already given a notice to the Registrar of Trade Unions over their resolution to form the new union.

He said their union was targeting over 2,000 members.

He accused Sang of abandoning his core mandate to fight for the welfare of members and was instead using the union to spearhead succession politics ahead of the next year's elections.

He said they had blessings of the Kenya Ports Authority to form the new union.

"Sang has turned our union into a political outfit. He no longer promotes the rights of port workers but is busy in succession politics," said Kamau.

"The KPA Board of Management under Major General Retired Raymond Kibwana gave workers the nod to join a union of their choice during their last meeting. So we are within the Law," he added.

He said the KPA employees from grade HM 3, 4 and 2 were allowed to form their own union.

"DWU lacks a future after the spokesman decided to become a political activist at the expense of the members," said Kamau.

"We urge other dissatisfied members to join our new union," he added.

Other interim officials include Ali Khamisi as Secretary with Peter Ouma as the Organizer.