Meet the richest man in the world 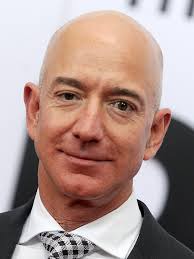 As of 2021, Jeff Bezos is the richest person on earth, with his personal fortune eclipsing the wealth amassed by Microsoft Corp. co-founder Bill Gates and legendary investor Warren Buffet.1 2 3 Bezos made the top spot of Forbes' 2020 400 Richest in America list with a net worth of $173 billion.4 As of the magazine's 2021 World's Billionaires List, he's valued at $177 billion.5

The founder and chief executive officer (CEO) of global e-commerce behemoth Amazon.com Inc. is responsible for running a platform that accounted for 5% of all U.S. retail sales and and whopping 49.1% of digital spending in 2018.1 6 As digitalization reshapes human behavior and the cloud computing revolution does the same to enterprise, the leader in online retail, with its high-flying cloud computing platform Amazon Web Services (AWS), is only forecasted to propel higher—spelling more good news for its founder.7

When Bezos had the idea for his e-commerce company, his well-intentioned boss tried to talk him out of quitting his stable job with D.E. Shaw.8 Yet Bezos, raised by his teen mom and later his Cuban immigrant stepfather, always dreamed of creating something different, once telling his school teacher that "the future of mankind is not on this planet."﻿9 Bezos even has a website, BezosExpeditions.com, that provides a rundown of 34 his major investments, projects, and philanthropic endeavors. The name "expeditions" is appropriate since Bezos' investments are not concentrated in just one or two industries or even ma werket sectors; rather, they represent a far-flung exploration of many different business areas and ideas, including cloud computing, robotics, biotechnology, and even home-blown glass.10

Jeff Bezos is perhaps most well known as the founder and CEO of internet giant Amazon.com.

His net worth has now surpassed $177 billion, making him not only one of the world’s richest people but wealthier than anyone else on the planet dating back to at least 1982.11

Bezos also has substantial holdings in more traditional investments, such as real estate, as well as a significant number of shares in other prominent companies.

The tech visionary graduated from Princeton with a major in computer science and electrical engineering.12 Upon graduating, he turned down job offers from companies such as Intel and Bell Labs to join a startup called Fitel. He went on to launch a news-by-fax service company with Halsey Minor, the founder of CNET. After the venture failed, Bezos became the youngest senior vice president at a hedge fund called D.E. Shaw, working his way up the ranks in just four years.13

Bezos might have stayed on Wall Street for the rest of his career if he hadn't been enthralled by the knowledge that, by 1994, the Internet was growing at the rate of 2,300% annually.14 Soon enough, his idea for Amazon was born, and the future CEO began making a list of 20 possible product categories to sell online.15

Amazon.com, then a platform for selling books, grew in its early stages out of a garage with a potbelly stove. Bezos, who put his own $10,000 in the company comprised of himself, his wife, and two programmers, ironically conducted most of his meetings at the neighborhood Barnes & Noble.13 16 Within its first month after launch in July 1995, Amazon sold books in every state in the U.S. and 45 countries around the world."9

During Amazon's first year, Bezos tried to raise money by predicting $74 million in sales by 2000, far underestimating the reality: $1.64 billion in sales in 1999 alone.17﻿18 He managed to gather $1 million in seed funding from angel investors after using up investments from his family, primarily from his parents, who contributed a significant portion of their life savings. The first approximately 20 investors in Amazon put in about $50,000 each for a stake rounded to 1%. Each investment would now be worth approximately $16.71 billion, representing a roughly 334,200 times return, given the investors held onto their entire stakes and that they had never been diluted by later investors.19﻿20 In June 1996, Amazon raised another $8 million in Series A from venture capital firm Kleiner Perkins.21

Amazon went public in May 1997 and turned out to be one of the few startups that survived the dot-com bust. As the platform diversified its product offerings and solidified itself as a market leader and pioneer, annual sales skyrocketed from $511,000 in 1995 to over $3 billion in 2001.22﻿23 In 2013, Bezos revealed his first plans for the company's revolutionary Amazon Prime subscription business, with Amazon Prime Air, which would use drones to deliver to customers.24﻿25

In 1998, Bezos also became an early investor in Google. While he has not revealed what he has kept of the stock after its initial public offering in 2004, his $250,000 investment would be worth billions today.26 In Aug. 2013, the business mogul bought The Washington Post for $250 million.27 Since then, its audience and traffic has exploded, surpassing The New York Times in terms of U.S. unique web viewers in Oct. 2015.28

The company's share price reflects this phenomenal growth. The stock increased over 400% from Jan. 2015 to Jan. 2021 and rose more than 75% between Jan. 2020 to Jan. 2021 alone.29 Bezos owned about 15.1% of the two decade-old company as of 2020, making it the largest source of his wealth.30 Between 2017 and 2019, Bezos sold more than a million shares and also distributed additional shares to his ex-wife as part of divorce proceedings.31 The 2020 Annual Meeting announcement showed Bezos owning over 75 million shares.32

Bezos also has substantial holdings in more traditional investments, such as real estate. His 165,000-acre Corn Ranch in Texas was acquired as the base of operations for his aerospace company, Blue Origin, and serves as the test site for the vertical-landing manned suborbital New Shepard rocket.34

His personal real estate includes holdings on both the east and west coast. Bezos has two multi-million dollar homes in Beverly Hills and a 10,000-square-foot apartment in the Century Tower in Manhattan that cost him just under $10 million.35 Bezos' New York presence is reported to have boosted Century Tower property values even higher, with space selling for $2,000 to $3,000 per square foot. He also has a lakeside property in Washington State, on which he spent $28 million to increase the living space to almost 30,000 square feet.34

In 2012, Amazon bought its own South Lake Union headquarters building in Seattle for $1.5 billion, instantly making the company one of the city's largest commercial property owners. Amazon took possession of nearly a dozen buildings, almost 2 million square feet of office space and approximately 100,000 square feet of retail space.36 In Aug. 2017, the Seattle Times reported that Amazon had just as much office space as Seattle's next 40 largest employers combined.37

Bezos has also invested very sizable sums in giving back through charitable donations. In addition to the Bezos Family Foundation that funds several education projects, Bezos has made individual multimillion-dollar charitable contributions to the Seattle Museum of History and Industry as well as to his alma mater, Princeton University.38 39 40

In Jan. 2018, Bezos and his ex-wife, MacKenzie, announced a $33 million dollar donation to TheDream.US, an organization working to improve college access for undocumented immigrant youth who were brought to the United States as young children. The grant will provide college scholarships to 1,000 U.S. high school graduates with DACA status.41

Bezos has an affinity for the technology sector, for media and communication services that facilitate connecting people, and also for just what he considers to be potentially profitable investments. In the media and communications sector, Bezos has invested in Twitter Inc. and the popular business news website Business Insider.10 He acquired The Washington Post in 2013 for $250 million.27 ZocDoc Inc. and Nextdoor are both platforms for connecting people in which Bezos has invested.10﻿42﻿43﻿44

In the travel sector, Bezos has $35 million in transportation service Uber.45﻿46 Bezos is a big believer in the cloud, as evidenced by Amazon's major push into providing cloud computing services.7 However, his investment interest does not end with his own company. One of his notable investment successes is Workday Inc., a company that provides human resource services in the cloud.10 Shortly after Bezos' venture capital investment in the company, it went public in an initial public offering (IPO) that garnered $684 million.47 In the sphere of a more traditional retail business, Bezos has also invested in Glassybaby, a company that makes glass-blown holders for votive candles.10﻿48

Two of Bezos' investments that engender a lot of discussion and that are considered a bit off-the-wall are the 10,000-year clock and the F-1 engine retrieval project. The 10,000-year clock project is an effort to build a clock into the side of the Sierra Diablo mountain range in Texas, a clock that literally keeps on ticking for 10,000 years. The clock is planned to have a chime generator that generates a different chime sound for each day. Just coming up with 10,000 x 365 different chime sounds like a pretty daunting challenge. Bezos explained the need for the clock by saying today's global problems require "long-term thinking."49

The F-1 engine retrieval project was an effort to salvage the engines that powered the Apollo 11 flight to the moon from the ocean floor. Enough artifacts were recovered to fashion displays out of two F-1 engines. The artifacts were donated to Seattle's Museum of Flight in 2015.50

With his booming wealth, Bezos is now able to fulfill his childhood dream of becoming a space entrepreneur. Each year, he commits $1 billion to his space-exploration company, Blue Origin, which, in 2016 became one of the first commercial companies to launch a reusable rocket.51 52 On July 18, 2018, Blue Origin sent spacecraft "New Shepard" into high altitude order to test its safety systems, which worked.53

Content created and supplied by: Denis3900 (via Opera News )