By Countrywidenews (self media writer) | 1 month ago 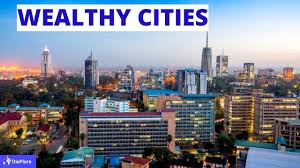 In Africa, the wealth of the cities is measured by cash equities, business, primary residences, property, and the interests of different businesses.

Here are the top leading countries:

This is the South African city which is the leading in wealth. It is estimated to have sh214trillion and it's the most visited city in Africa with an average visitors of 5 million every year.

Cape Town is the legislative capital of South Africa. This town has an average wealth of more than sh 13trillion and its estimated population is over a 3.5million people and it has only 1 roller billionaire.

It's the capital and largest city of Egypt, in this city, most billionaires in Africa stay there and it has a total wealth of about sh 12.9trillion where also accounts for 22%of Egypt's economy.

Lagos city is known to be highly populated in Africa with over a 22million people. It has wealth of about sh 9.6trillion where it has 2 dollar billionaires and 5400 millionaires.

This city is found on the east coast region of South Africa and it is the fifth wealthiest city in the country. It has an actual total wealth of about sh 5.4 trillion.

It's the capital city of Kenya and it has an average population of 4.5 million people in city with a wealth of sh 4.9 trillion. Most people visit the city in East Africa and it has 1 dollar and 6200 millionaires.

It's the administrative city of South Africa with a total population of over a 2.5million residents where it has a total wealth of sh 4.5 trillion which makes the city to be popular.

It's found in Angola and it's the capital and largest city with a total wealth of sh 4.3 trillion. The city has only 1 dollar billionaire and 5200 millionaires.

It is the capital and largest city of Morocco with an average population of 3.8 million residents and it has a total wealth of about sh 3.9 trillion. The city has 2 dollar billionaires.

This city is located in Ghana and is set to most manufacturing and marketing centers. It's the second west African city. In this city, it has an average net worth of 1000 million.