By mbevicaro (self media writer) | 3 months ago 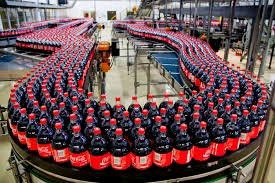 The Coca-Cola Company intends to begin selling its beverages in Myanmar for the first time in sixty years, as a result of the U.S. government's decision to lift investment sanctions against the country due to its democratic changes.

Myanmar is one of three nations in which Coca-Cola does not conduct business. Cuba and North Korea represent the last two.

The world's largest soft drink manufacturer announced Thursday that it will begin operations in the country as soon as the U.S. government obtains a license for such investments by American companies.

The United States said last month that it was waiving limitations on American investments in the Southeast Asian nation that is still in the process of transitioning to democracy. Myanmar was ruled by an authoritarian military regime until last year.

Coca-Cola stated that it will first import its products from surrounding countries as it creates local operations in Myanmar; the business argues that it has a history of being among the first to enter or re-enter markets.

In 1949, for instance, the communist government of China banned Coca-Cola and other foreign corporations. After formal diplomatic ties were established with the Philippines in 1979, Coca-Cola shipped 20,000 cases of its flagship beverage from Hong Kong, a British territory at the time, into the country.

The Atlanta-based company also mentioned that Cuba was one of the first nations in which it conducted business, beginning operations there in 1906. After the Cuban Revolution, however, Fidel Castro's government proceeded to seize private property, and in 1960 the corporation liquidated and left the country. The firm has never conducted business in North Korea.

In these nations, Coca-Cola goods are obtained through independent third parties.

Coca-Cola announced that, as part of its effort in Myanmar, it will provide $3 million to help the creation of jobs for women in the nation. The company will collaborate with PACT, a nonprofit organization that supports economic and health initiatives in poor countries.

Content created and supplied by: mbevicaro (via Opera News )