By BibahBM (self media writer) | 22 days ago 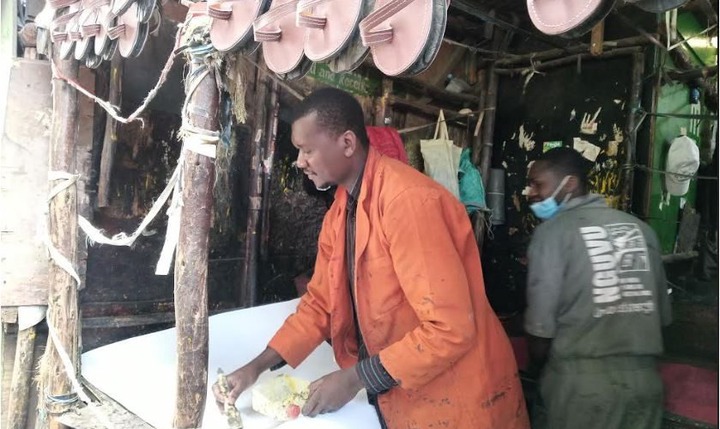 SOME people throw the used tyres after they get old but for Joseph Mwaniki, 33, the old tyres are useful for him. At his garage in Kariokor, Nairobi, Mwaniki said after resigning as an agent of an insurance company, he ventured into the business of creating various products using old tyres.

“I assemble old tyres, wash them, and make a variety of different products. The money I get from it is unbelievable,” said Mwaniki. From the tyres, he makes shoes, belts, luggage ropes and seats.

How he makes the shoes

After washing, the old tyre is cut into various shapes to make a shoe. Camel skin is also cut into different shapes. After that, the camel's skin is glued together with Crowmix glue.

The skin is bonded with rexin using tuffstick glue to avoid scratching. After that, the skin along with the rexin bonds are placed in a sewing machine so that they are completely connected.

After sewing, they are attached to a ready-made tyre to form a long-lasting shoe. Last but not least, the custom-made shoes are put on an embroidery machine to impress the customer more. In a day, Mwaniki can make more than 50 shoes. 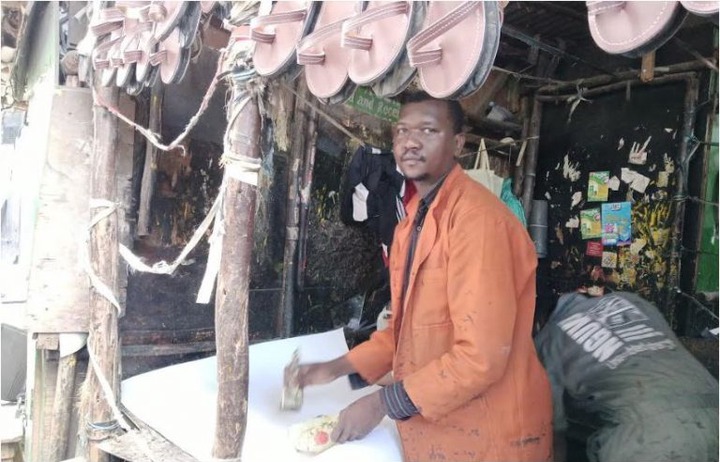 Photo: Joseph Mwaniki in his workshop

“I usually sell shoes at a wholesale price, especially to the Maasai who buy a lot of shoes. However, I also sell to retail customers who visit my workshop,” Mwaniki said.

Per day, the famous businessman earns more than Sh5000 from his business. In a month, Joseph Mwaniki makes Shs 150,000 ftom old tyres to make different goods. Each shoe he sells for between Sh200 and Sh400 depending on the quality and the customer's pocket.

“If a customer seems to have money, I will tell him the high price,” said Mwaniki. Of the more than 50 shoes he makes every day, Mwaniki can sell almost all of them.

Apart from shoes, Mwaniki uses old tyres to make traditional chairs that are in line with the traditions and customs of various communities in the country. He often sells the chairs in rural markets because he has hired the workers he trained to create them.

On the other hand, he repairs ropes that are frequently used by motorcyclists to tie and carry luggage. His business has enabled him to build a luxury home in the countryside and educate his two sons. The biggest challenge for his business is the high level of competition.

However, he always strives to be different from his competitors by creating unique products. He advises young people to be creative in everything they do to increase their income. “Creativity is the backbone of any business. This will enable you to beat your competitors,” advised Mwaniki.