By BibahBM (self meida writer) | 20 days 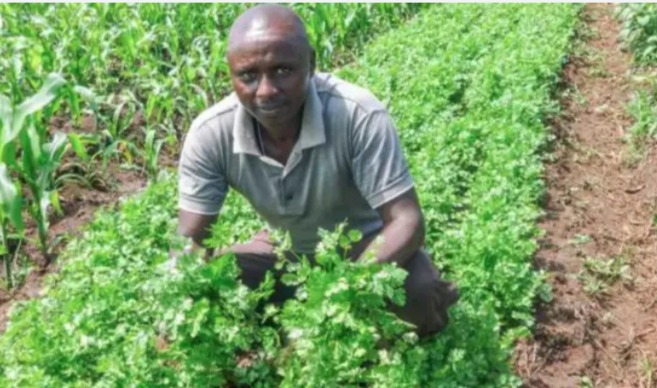 Michael Ngacha is a native of Mukurweini, Nyeri County. Like many others he landed in Nairobi County in search of a job that after his success he was able to save and buy a car that he turned into a taxi.

He registered under the popular uber company for more than five years. However, intense competition in the private transportation sector led him to stop the business due to lack of revenue.

"The business started to go awry and unprofitable because so many people bought cars and made them taxis which forced me to sell my car and find an alternative way to meet the needs of the family," he explains.

According to him, he needed to grow commercial crops that take a short time to mature and whose sales are profitable. After doing his research he discovered that the coriander plant matures in a short time and it is used in daily urban recipes.

He says that over time he discovered he had a problem with the shortage of seeds he needed as well as the high cost of seeds which led to delays in sowing some in due course.

"In agriculture the coriander business requires the farmer to have his seeds always considering that the plant matures after 40 days. This means that when the plant is three weeks old, the farmer is advised to leave some seeds so that he does not have a chance to lose customers." He explains.

As many users of this plant point out, they are unaware that its seeds are beneficial to the body in proportion to its branches.

According to a study by the University of Ayurveda, California, coriander seeds have great potential in treating some skin diseases such as eczema, skin rashes, rashes and skin rashes as they are believed to have antibodies that help fight these problems.

The study also showed that these coriander seeds help heal mouth ulcers. The acid found in these seeds contains nuclei that help reduce the pain of inflammation in the body.

Farmer Michael explains that coriander is a plant that can be grown with other plants such as vegetables and maize.

You need areas with adequate sunlight if there is enough water. He says the plant needs strong sunlight for seeds. There are two types of coriander, there are short and long ones.

The difference is that the long one has a pleasant taste and has a distinctive scent from a distance compared to the short one. As he explains, he usually sows the seeds in separate nurseries to differentiate between those that are sold early and those that he needs to dry and return to the farm the following season.

The seed pods wait until they begin to produce white flowers that eventually produce seeds. When ripe, these seeds are harvested and dried in the sun.

After they mature, he sells to wholesalers in the main Marikiti market to avoid brokers who harass farmers.

"I decided to find a market for myself, my clients are the ones who sell coriander in wholesale which I send directly from the farm. I often sell for Sh30 a bunch.