Uhuru Kenyatta's final term has been marked by one clear ambition; rebuilding the bridges that he had recklessly destroyed back in 2013. Although the union with Raila Odinga which was initiated by the Handshake may be his most renowned truce, he has been compelled to eat words that his leadership once shouted with reckless abandon. 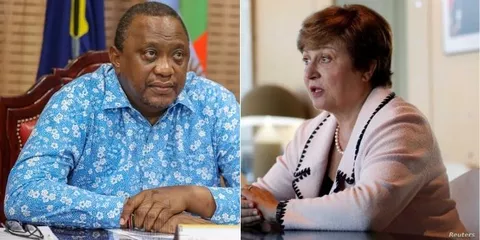 In 2013, having risen to power against all anticipations, and considered outcasts by the West due to their ICC cases, anti-West rhetoric was common. However, the head of state has now been cornered to seek IMF aid, with the Chinese having an immensity of pressure on him.

Kenya had anticipated to extend the debt repayment period from bilateral lenders, including China, which started in January 2021, by an additional six months to December 2021, saving it from settling a debt of about Sh50 billion to Beijing lenders.

Chinese loaners, especially Exim Bank, were not comfortable with Kenya’s appeal for extension of the debt suspension with wealthy countries, causing delays in allocations to projects funded by Chinese financiers.

This forced Kenya to dismiss its push for the credit repayment holiday by China for fear of ruining relations with the country's well-known international lender.

Having been driven to the wall, and running short of alternatives, the country now opts to use reserves from the International Monetary Fund (IMF) to compensate for Chinese loans it repaid after the Treasury dropped an earlier request to defer debt payments.

The Treasury hints that it could harness its additional allocation of IMF reserves in Special Drawing Rights (SDR) assets, which can be converted to government-backed money, as one of the options to fill up the budget gap.

SDRs are the IMF’s unit of exchange based on sterling, dollars, euros, yen and yuan, and can be used to meet obligations like repayment of foreign public debt.

The IMF is expected to play an onus in shaping the policy that would call upon the government to execute stern conditions across several sectors of the economy.

The conditions are linked to the fund’s multi-billion shilling loan facilities to Kenya where money goes straight into the budget to bolster the national wallet.

Why You Should Avoid Getting Married To The Wrong Person

Here Is How Magicians Walk On Sharp Nails Without Being Pricked