Know About The Crying Stone That Stopped Shedding Tears 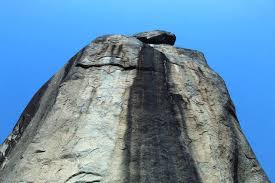 Outside the beautiful town of Kakamega on a ridge lying on the Kisumu-Kakamega highway, stands the Crying Stone of Ilesi in Kakamega county. The Stone serves as one of the major sources of income as far as tourism is concerned in Kakamega county and Kenya at large.

The Stone is about forty metres tall and it has left many viewers with alot of astonishment due to its nature, formation and also the fact that it used to shed tears some time back. The people around it call the Stone "Ikhongo Murwi" in their local language. 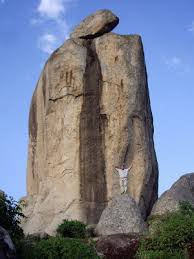 The rock is made up of a large boulder balanced on a column of a rock with water flowing from a groove in the centre. It's like a head resting on weary shoulders and when viewed from certain angles, it resembles a person crying.

From the Stone's occurrence, there are certain beliefs by different groups of people about its existence. For instance, the Isukha people believes that the Stone's tears indicated good harvest. On the other hand, before colonial period, the Nandi warriors believed that the Stone acted as a foreboding that provided strength to Isukha fighters.

Contrary to people's anticipations about the nature and behavior of the rock, in recent years, it has been found out that the tracks made by water running down the rock face are now more visible because the rock has stopped crying.

The case of the rock halting the shedding of tears has left curiosity among the locals and tourism at large, hence many have been trying to find out the exact cause of the Rock's behavior.

1.Some people have concluded that the behavior is caused by the Agroforestry activities at Ilesi where the money trees planted to serve as electric poles suck up large amounts of underground water thus water became limited enough for the rock not to access it.

2. According to the Ministry of Agriculture, Livestock and Fishery in Kenya, they published a climate risk profile on Kakamega that reveals the cause of the Stone's failure to shed tears as increased annual rainfall experienced in the area. The profile explains that the rain is more unsteady therefore it led to extreme bursts of the rock destructing its natural formation.

These are just but suggestions. Researchers are at work to come up with a clear picture and explanations that will make a permanent solution for the curiosity left in people's minds about the behavior of the Crying Stone.

The Kind of Chief Justice, Kenya as a Society Needs

Kajala And Her Daughter Bailed Out : See The Person Behind The 13 Million Cash Bill