Touching Story Of How Man Made BILLIONS From 'Kinyozi' Business 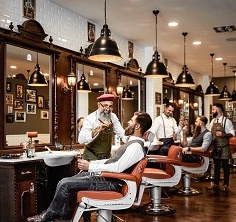 A man identified as Ramesh Babu was born in Bangalore to a family of five. According to reports, his father used to run a barbershop. Ramesh Babu lost his father when he was just seven and which marks the beginning of hardship in his life at a very little age. After the death of his father and when his mother have nobody to help her fend for the needs of her family, she took up the responsibility of taking care of her child 'Ramesh'.

Her mother was said to took charge of raising three kids and worked as a servant at various houses to feed her children. She also rented out the barbershop her husband left her for Rs.5 per day, as she couldn’t run the shop all by herself.Ramesh Babu has one brother and one sister. His mother could not run the barbershop; she rented it out for ₹5 a day.

He took up different odd jobs to make a little extra money. He started part-time newspaper delivery work, milk bottles supplying and whatever else was convenient to support his family at the age of 13.He continued his studies while supporting his family. And, still in struggles he finished his tenth standard study. Ramesh could not decide if he should study further or start working.

His father’s Barber Shop was still being rented out, In 1989, Ramesh Babu decided to run his fathers’ Barber Shop himself to support his family.Ramesh Badu opened saloon early morning at 6 o’clock and then, at 10 o’clock, he would go to college and again come back in the evenings open until midnight 12 to 1 o’clock.

He extended his working hours for almost 16 hours a day. And many see him as a simple barber who operates the saloon of cutting and styling hair.His clients range from military officers, big politicians, police officers to Bollywood actors, like Aamir Khan, Aishwarya Rai Bachchan, Akshay Kumar, Salman Khan, and Anil Kapoor. He always believed that work is worship.

Nandini Akka whose house his mother used to work asked him why you do not rent out his Maruti van instead of it just lying around. She advised him to lease the Omni to Intel. Ramesh Babu started renting out. That is how he came into the car rental business and in 2004, he started adding more cars to the fleet and had six cars all engaged in the same business.

In 1994 and 2004, with the help of Karnataka State Finance Corporation, Ramesh Babu bought seven more cars and his car rental business now known as Ramesh Tours and Travels. In the same year, Ramesh thought of getting into the luxury car segment and bought Mercedes E-Class luxury sedan for 38 Lakh. Everyone told him that it is a big mistake.

Later, Ramesh Babu received a proposal from Mercedes India to buy a model in the mid-2000s. He put together his all savings and raised the rest of the amount through a Karnataka State Finance Corporation bank loan.To expand his business, Ramesh Babu went to Singapore to learn hair cut & hairstyling and did a course with Toni & Guy and also took up hairstyling himself. He began hairstyling courses to hone his seemingly natural talent.

In 2011, Ramesh Babu bought another luxury car, Rolls Royce. Well-wishers warned him about the scope of failures against buying luxury car like Rolls Royce.

Rolls Royce was very expensive. Ramesh Babu mortgaged his wife’s jewellery and almost bankrupt. People told him to sell all expensive and luxury car, but he kept trying and one and half years later Ramesh finally managed to succeed again. Kindly share your views on this story.