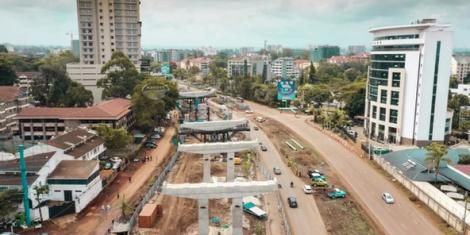 Real Estate brokers and landlords are already minting cash thanks to Nairobi Expressway whose construction is now 87 per cent complete.

Two real estate experts explained that the house and land prices are only expected to go up beginning June 2022 after the expressway is completed.

One of the experts, who sells 4-bedroom and 5-bedroom houses in neighbourhoods next to the highway, disclosed that they are retailing at Ksh12.5 million and Ksh14.5 million.

"It is a given that the prices (both rental and purchase) will be much more expensive because everybody will use that (Nairobi Expressway) as a marketing front."

Of course, it is logically expected to be higher," she stated without attaching a figure to the increase awaiting research.

Another Real Estate expert Effie Otieno from Cytonn Real Estate conquered with the prediction noting that the prices were expected to spike as is experienced whenever an Infrastructure project lands in a region.

"The main factor that attracts people to any piece of land is the availability of infrastructure including roads which promote accessibility.

"Now, it is opening up Mombasa Road mostly by reducing the effect that traffic had and making it more accessible so that if I want to go to Syokimau, Athi River and Kitengela, I won't suffer from the traffic," stated Otieno.

She further noted that different areas are likely to be affected differently depending on the cost per square metre.

She further indicated that currently, the price per square meter of apartments along Waiyaki is around Ksh89,700 while Westlands stands at Ksh51,500

In Syokimau, the Price per square meter is Ksh 70,277 while a 2-bedroom retails between Ksh5 million and Ksh2.5 million. Rent for the two-bedroom house also ranges between Ksh25,000 to Ksh35,000 while the rental yield stands at 5.7 per cent.

The rental yields represent the growth rate of rental prices of an area in a span of one year. The construction of the expressway is expected to  end in June 2022.

In the same area, a three-bedroom house goes for between Ksh7 million and Ksh8 million while the rental price ranging between Ksh30,000 and Ksh37,000. The rent is expected to rise by 5 per cent as of 2022.

The land in Syokimau was Ksh3 million in 2011 and has grown to Ksh12 million. It is expected to grow by 5.1 per cent.

Three bedrooms retail for between Ksh26 million and Ksh28 million while the rental yields is 3.1 per cent.

"In relations to the Expressway, most commercial areas were experiencing a decline in prices especially land because of reduced demand. People are not developing. We realised it was the best performing and the decline was not that big," stated Otieno noting how Covid-19 had affected workspace culture.

"We expect it to grow because of the construction activity and the expressway," she explained.

Two bedrooms are valued between Ksh8 million and Ksh9.5 million while the rent is between Ksh40,000 and Ksh42,000 and it is expected to grow 4.8 per cent.

Three bedrooms on the other hand retail for between Ksh10 million and Ksh11 million while rent ranges between Ksh60,0000 and Ksh65,000 and are expected to spike by 5.6 percent in 2022.

"I know (with Nirobi Expressway) prices will go up beyond the estimation but it will be a one-time shock after the project has been finalised. I am sure with time the prices might flatten," she concluded.