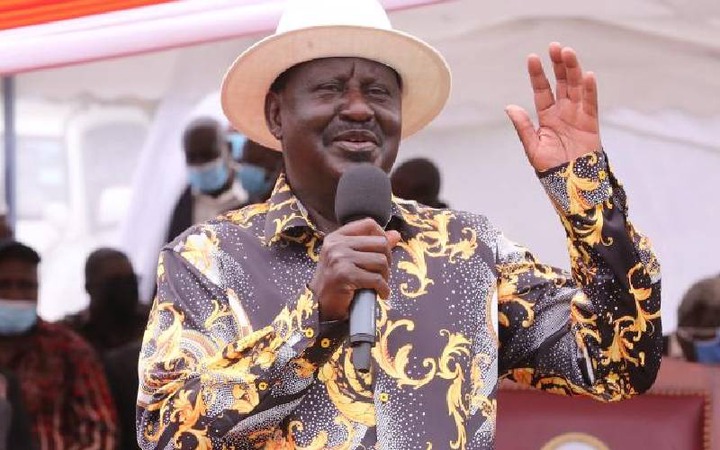 ODM while speaking in his tours across the country said that Kenyans will benefit from enhanced social welfare system if he wins the presidency in 2022 general elections.

Mr Odinga while speaking say vulnerable families will be given Sh 6,000 monthly for their lifetime.

Odinga added that if elected come next year promised economic revolution by improving lives of Kenyans with sound financial structures.

Odinga said when his time comes he will make sure the youth benefit after long time waiting for jobs. He also added that his government will allocate four billion(4B) shillings to cover those that lost their jobs during the pandemic.

However his sentiments was followed by online condemnation from social divide;

"I don't think that is real can u pay those who lost jobs in private sector talk other things," Joseph tweeted.

"Raila can deliver. We have seen him do before. Only if he doesn't associate himself with crooks. He should go Mudavadi, Kalonzo who are not greedy and have clear plans for the state," Thunder Bolt tweeted.

"Youths without jobs are more than those with jobs, where will he get that money yet in some counties fail to pay their workers," Ahmed tweeted.

"How many Kenyans are unemployed & how do we define unemployed? If it's (9M x 6k) + one off 4B, it's a big dream & lie. How now? Where will he get that money if not China?" Kenneth tweeted.

"When Magufuli said he was to build a railway with their own money, everyone wondered where a middle income economy will get money. If you stop corruption, you can afford the youth even sh 10,000," Unperturbed tweeted.

That's good, but the question is where will the money be coming from? Or it will be more borrowing of loans or increased taxation? We should be very careful with these politicians not to increase more problems," Cyrus tweeted.