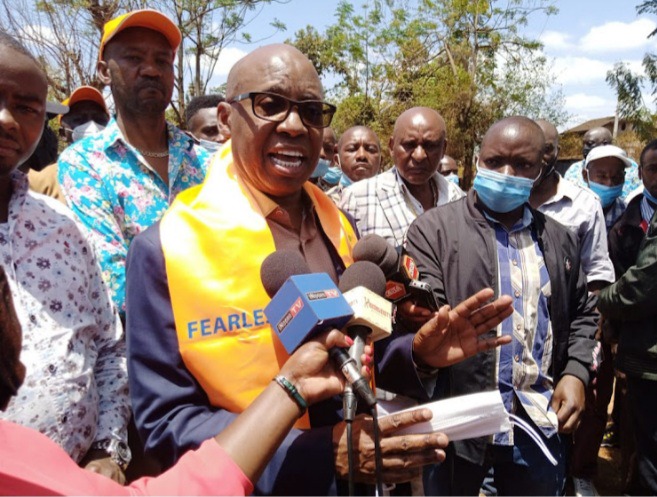 ODM presidential hopeful Jimmy Wanjigi has rejected a proposal by Raila Odinga to grant a monthly allowance of Sh 6,000 to unemployed youth if he forms the next government.

Wanjigi said Raila's plan was not economically viable for an indebted country like Kenya. Speaking at AIPCA Kutus in Kirinyaga County on Sunday, Raila said the country was already struggling to repay huge debts.

Wanjigi observed that the country would spend 300 billion shillings every year if it were to implement Raila's proposal.

“In the government books, they say we have 4 million unemployed young people, and if you give 6,000 Sh for each of those young people, that means you will spend 300 billion a year,” he said.

“Let the resources of hard-working Kenyans be funneled into national development programs other than the unemployed,” he said.

Wanjigi added that instead of promising money to those who are not working, Raila should push for the full implementation of the National Social Security Law which provides the framework for the government to financially assist all Kenyans. Unemployed. He said that despite its passage by parliament in 2013, the government has yet to implement it.

Wanjigi insisted he would run for president and called for a fair nomination process.

He said his plan would empower ordinary Kenyans and move the agenda forward throughout his campaigns.

“My agenda is to empower Kenyans by showing them how to make money,” he said.

Wanjigi further accused the ODM leader and other key national politicians of having been in power for decades and failing to give Kenyans transformative leadership.

“The reason we tie our agendas to the slogan 'Fagia Wote' is that the leaders we have had have been tested for over 30 years and have continuously failed. So we want to change the narrative and give Kenya a new face through its new generation of leaders, ”he said.

Wanjigi added that he would remain adamant in his quest to run for president in next year's polls.

He berated those urging him to run for the governorship of Nairobi, saying he would not take any of their advice as it tries to scuttle his candidacy for the presidency.

"I will stop at nothing to see my dream come true. Those who attempt to sabotage my dream by suggesting that I should run for other elected office should be informed that I am focusing on the dream of the presidency," a- he added.

He said he would fight for a ticket to the ODM even if he continues to face clashes at the hands of the party's board.

Wanjigi challenged the council to embrace democracy and transparency in party elections.

He criticized the manner in which some popular primaries were conducted without fairness and without respect for the party constitution.

"We wrote to the party that presented our complaints about the way the elections in some areas were conducted. Some were held even at night," he said.