By Dallasnews (self media writer) | 8 days ago 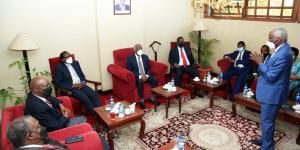 The meeting between One Kenya Alliance (OKA) and Mt Kenya Kenya Foundation (MKF) did not feature the big names, power operatives, and tycoons who attended ODM Leader Raila Odinga's event a few days ago.

The only notable bigwig from the Mt Kenya region at the event held at Safari Park Hotel in Nairobi on Thursday, October 7 was banking guru Peter Munga who also adds up as the Chairperson of the foundation.

Another top figure from the Mt Kenya region who graced the function was former Permanent Secretary and Lapsset boss Titus Ibui - Munga's deputy.

Their reasons for skipping the event which was rescheduled after being postponed was not immediately made public.

Munga, who spoke on behalf of MKF refuted claims that the group is made up of billionaires. In his argument, he stated that the leaders from the region are just pushing to have their interests featured when Uhuru exits the stage.

"Those who are saying we are billionaires, may God hear their prayers so that we can double what we have," Munga stated.

Munga further revealed that in 2007 he was accompanied by James Mwangi and the late Chris Kirubi to convince Wiper Leader Kalonzo Musyoka to drop his presidential bid and support the candidate fronted by MKF - Mwai Kibaki.

However, Kalonzo turned down the offer which made their candidate Kibaki win but with a slight margin against Raila.

"It was myself, James Mwangi, and the late Chris Kirubi. If that friend of ours would have accepted our request the famous post-election skirmishes of 2007-2008 would not have occurred. That friend of ours got 800,000 votes and our candidate needed that so that his margin would have been bigger. The story I'm giving you is of none other but Stephen Kalonzo Musyoka," Munga remarked.

The tycoon added that later on, Kalonzo played a critical role in the formation of the Grand Coalition government.

On endorsing a presidential candidate, Munga noted that the region was yet to settle on one.

"We are business people. We are also agriculturalists. We trade with our crops. We trade with anything that is sellable at a profit as long it is okay with the government of the day," Munga said.

OKA leaders in their joint statement assured the leaders of the mountain that their government will listen to their demands. They also insisted on the need to root out graft in the country.

"Kenyans should come out and vote when the time comes. OKA believes in zero tolerance for graft," Kalonzo stated. 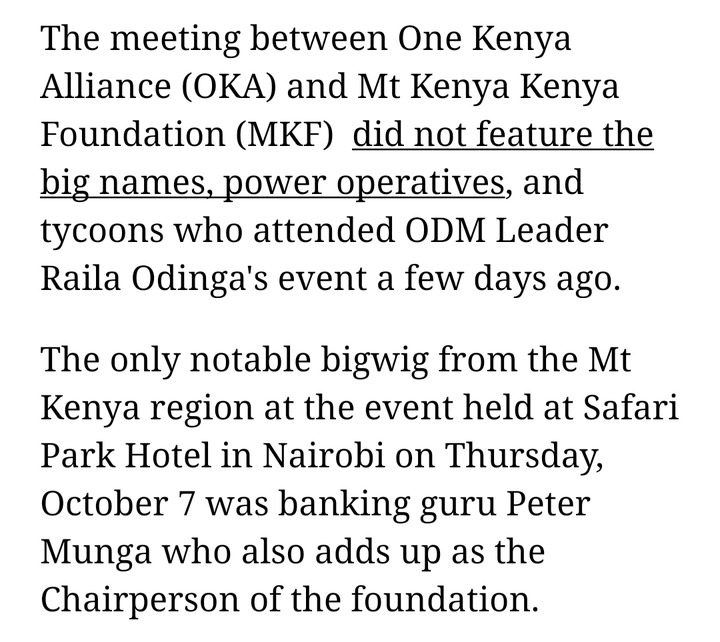