A French billionaire emerges as the world richest man

According to a recent Forbes article, a French billionaire named Benard Arnault, who is worth $200 billion, is the new richest man in the planet. 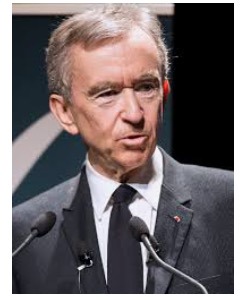 Bernard Arnault is the CEO of Louis Vuitton Moet Hennessy (LVMH), a luxury conglomerate noted for its several famous brands that have given the company a household name.

Other world billionaires such as Jeff Bezos, Elon Musk, Warren Buffett, and Bill Gates, who were previously considered the richest men on Earth, have been surpassed by the latest World richest man.

Benard Arnault, the world's richest man, was born on March 5, 1949, and began his quest to become a globally renowned billionaire in 2005, when he was classified as one of the world's top ten richest individuals.

Bernard began working for his father, Jean Arnault, at a young age. His father had made a fortune with his construction firm, Ferret Savinel. In 1979, the young Benard took over as Chairman of his father's company, and after eight years, he renamed it Ferinel Incorporation and focused mostly on real estate.

In 2003, Arnault purchased a slew of premium businesses, including Fendi of Italy. He purchased La Samaritaine, a French department store, in 2010. He purchased Bulgari, an Italian jewelry business, in 2011 and Tiffany & Co., an American jewelry corporation, in 2021.

Here Estimate cost of Washing an Aeroplane in Kenyan Shillings.