Farmers Have Been Advised to Exercise Caution When Purchasing Planting Seeds

By Fulisa.News (self meida writer) | 6 days 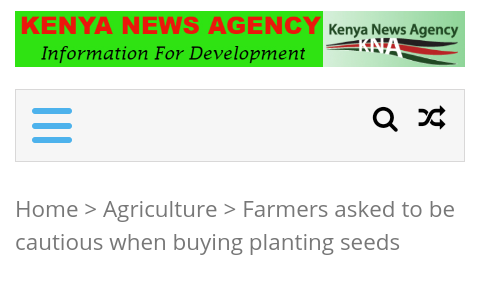 Farmers should exercise caution when purchasing hybrid planting seeds to ensure they get the right seeds that will thrive in their region and avoid losses.

Unauthorized dealers, according to Narok South Deputy County Commissioner Felix Kisalu, have flooded the market with counterfeit seeds and are selling them to unsuspecting farmers.

He urged farmers to look for the Kenya Bureau of Standards label on the package to ensure that the company selling them seeds was authorized, and to confirm the expiry date to avoid purchasing expired seeds.

When in doubt, Kisalu advised farmers to seek advice from Agriculture Extension Officers, who can provide guidance on the best seedlings to plant in specific regions.

A group of farmers made the call after their maize plantation was attacked by head smut disease, which is caused by fungal infection.

Edwin Mainga, a well-known farmer in the area, said he planted maize hybrid 6230 in his 168-acre plot of land expecting a good harvest but was surprised when most of the crops began to show signs of fungal infection.

The farmer claims he spent Sh2 million preparing the shamba and purchasing seeds for planting, an activity he has been doing for the past six years.

To save time, he said he requested planting seeds from an agent this year, who provided him with hybrid 6230 seeds he described as having been parked by Kenya Seed Company.

However, the crop did not fare as well as in previous years because the plants began to develop head smut when they reached maturity.

He claims that the situation has cost him millions of shillings in losses because he was forced to sell his plant for animal feed rather than human consumption.

Another farmer, Mzee Raphael Keiwua, reported similar losses after planting the same brand of hybrid 6230 from the same supplier.

The farmer believes the seeds were mixed and packed before being sold to unsuspecting farmers who paid Sh350 per two kilogram of hybrid seeds at the market price.

Head smut is a fungal disease that affects cereal crops such as maize, sorghum, and grasses, according to a report on the Kenya Agricultural and Livestock Research Organisation (KALRO) website. According to research, the disease is more prevalent in fields that are subjected to crop stress, which includes low nutrient levels, weeds, and moisture.

Farmers are advised to implement crop rotation to break the disease's cycle, as well as plough and burn infected plants.

It is not recommended to feed infected crops to cattle because the fungus that cannot be digested is passed out through dung and later reproduces, posing a threat to crops again. RIP: University Students Mourn Their Fellow Who Was Shot Dead By Unknown Assailants

4 Tips To Keep Your Teeth Healthy and Strong