By discoursecritique (self media writer) | 10 days ago

Kenya's devolution system, which was intended to bring the government closer to the people and improve service delivery, seems to be hitting a roadblock. A report from the Commission on Revenue Allocation has revealed that the allocation of funds to the 47 county governments is not sufficient for them to properly fulfill their duties and serve the residents in their capacities. 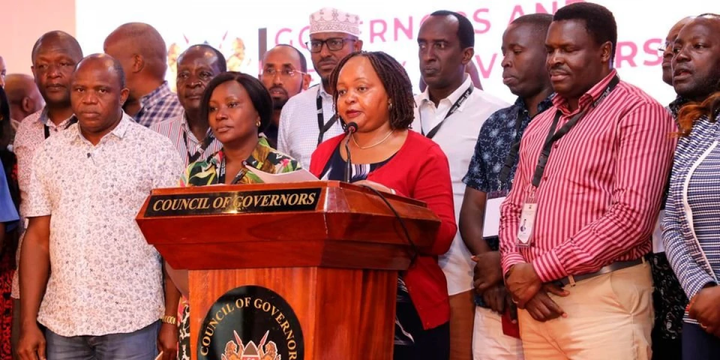 According to the CRA report, pursuant to the Division of Revenue Act, county governments were allocated an equitable share of Ksh. 370 billion for the financial year 2021/2022. This allocation was equivalent to 27.3% of the last audited accounts and meets the constitutional requirement of 15% of the last audited revenue raised nationally. In this regard, without political goodwill, the disbursements can be capped at a minimum of 15% or slightly above, leaving the national government with 85% of the revenue.

The limited funding is further exacerbated by the fact that a significant portion of the allocation is spent on salaries, leaving little for the county governments to run devolved functions such as Health, Agriculture, Water and Sanitation, regional development and maintaining county roads, street lighting, traffic, parking, public road transport, pre-primary education, village polytechnics, and childcare facilities as per the Fourth Schedule and Article 187(2) of the Constitution of Kenya.

Data from the latest report from the office of the Controller of Budget indicates that the 47 counties received Sh289.6 billion in the first nine months of the 2021/2022 financial year, against budget estimates of Sh528.5 billion. This shows that many counties spent the majority of their budgets on salaries, making a mockery of efforts to reduce the public wage bill.

The current state of affairs clearly shows that the county governments are struggling to deliver on their mandate with the limited funding they are receiving. To bridge this gap, it is imperative for governors to maintain a cordial relationship with the national government. With the national government being the primary source of revenue, it is essential for the governors to work together to ensure that the allocation of funds is fair and sufficient for the proper functioning of the devolved governments. This is crucial for the betterment of the people and the success of devolution as a whole.

If the current situation remains unchanged, the residents of Kenya's counties will be the ones to bear the brunt of the inadequate funding for devolved functions. The limited funding for county governments means that essential services such as healthcare, agriculture, water and sanitation, and regional development will not be adequately provided for. This will have a direct impact on the residents' well-being and quality of life.

For example, inadequate funding for healthcare services in the county means that residents may not have access to proper medical facilities and treatments. As indicated in one study, inadequate funding to counties "limits the ability of the counties to recruit an adequate number of health workers" to meet the available demand for healthcare services. In the same way, poor funding for agriculture means that farmers may not have access to the necessary resources to improve crop yields, which could lead to food insecurity and poverty.

Furthermore, as shown in the UNICEF report, poor funding for water and sanitation services means that many residents may not have access to clean water, which could lead to waterborne diseases, and poor sanitation could lead to a rise in hygiene-related illnesses. This will not only affect the health of the residents but also affect their productivity and economic well-being.

Inadequate funding for regional development means that residents may not have access to basic infrastructure such as roads, street lighting, and public transport, which could limit their mobility and access to opportunities. This could have a significant impact on the residents' socioeconomic well-being.

It is not only the limited funding allocated to the county governments that is the issue, but also the unequal distribution of resources from the national government. Counties found in regions that voted for the government tend to benefit more from the share that remains with the national government. This means that the counties in opposition strongholds are likely to be disproportionately affected by the current state of affairs. These counties are likely to depend only on the share given to county governments, which is inadequate as demonstrated by the statistics provided.

This unequal distribution of resources from the national government perpetuates a cycle of poverty and underdevelopment in opposition strongholds, compounding the already dire situation caused by inadequate funding for devolved functions. This highlights the need for a more equitable distribution of resources from the national government to ensure that all regions and their residents have an equal chance to develop and improve their standard of living.

From the foregoing, it is crucial for governors to maintain a cordial relationship with the national government in order to address this issue and ensure that the allocation of funds is fair and sufficient for the proper functioning of the devolved government. This is necessary for the betterment of the people and the success of devolution as a whole. Without sufficient funding, the residents of Kenya's counties will continue to suffer, and the goal of devolution to bring the government closer to the people and improve service delivery will not be achieved.

Content created and supplied by: discoursecritique (via Opera News )