By Gossipkenya (self meida writer) | 18 days

Today let us talk about air to water generation technology. One of the most prominent companies in this sector is Arizona-based Zero Mass Water, founded by Cody Friesen, a professor at Arizona State University, in 2014. Since then, the company has attracted both adoration and criticism about its product. 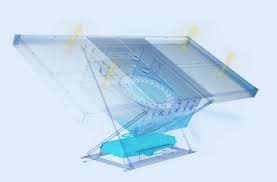 The panel is powered by solar energy completely off-grid. Fans draw in ambient air and push it through a hygroscopic or water-absorbing material that traps water vapor from the air. The water vapor is extracted and passively condenses into a liquid that is collected in the reservoir. And then minerals are added to make drinking water.

On average, each Hydropanel produces 90-150 liters of drinking water per month. Water produced depends on humidity and the amount of solar energy at the place of installation. As water is created, an onboard, internet-connected sensor ensures that the water is ready to be consumed and safe to drink. Owners can monitor their system from a smartphone app. 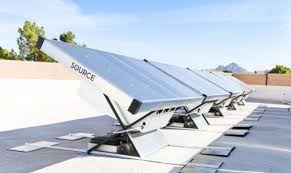 The cost of this thing is $2000. That is where Zero Mass Water got the most criticism from seasoned water practitioners. They argue that the off-grid technology would be truly disruptive if it could generate greater volumes of water at a lower price point. The company, however, estimates the water Source produces over its projected 15-year lifespan nets out to 15 cents per liter.

On top of that, there is an argument that the panel gives consumers the ability to get rid of disposable plastic bottles. And protects them from the possibility of waterborne illnesses. These are estimated by the World Health Organization to be responsible for about 1.8 million deaths per year due to the lack of safe drinking water, sanitation, and hygiene. Especially in regions where safe water is not even available or where it is a constrained resource. Like in much of the Middle East, northern Africa, and the southwestern United States.

Solving that alone would be impressive enough. And the fact that Source hydropanels not only produce water but that they produce verifiably clean, drinkable water is huge.

He Was a Loving and Caring Husband, Slain Officers' Wives Break Into Tears at His Burial

Distribution of Today's Covid-19 Cases in Counties and Sub Counties